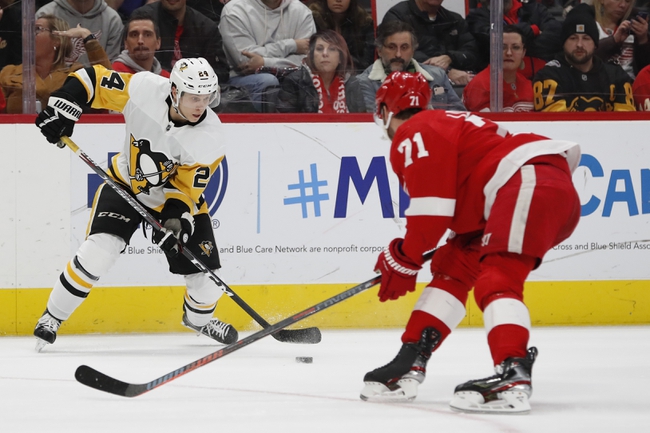 The Detroit Red Wings and the Pittsburgh Penguins meet in NHL action from the PPG Paints Arena on Sunday afternoon.

The Detroit Red Wings will try to snap a three-game losing streak after a 4-1 loss to Boston on Saturday afternoon. Darren Helm opened the scoring for the Red Wings just 3:12 into the game with a short-handed marker, but that’s where Detroit’s luck ran out as Boston tied the game just after the eight minute mark of the middle period and took the lead just 1:39 later. Boston added an insurance goal just 2:50 after that before chipped in a 4th for good measure with just over seven minutes to go, sending Detroit back empty-handed. Jonathan Bernier took the loss, falling to 12-17-2 on the year after allowing all 4 goals on 41 shots faced in the losing effort.

The Pittsburgh Penguins will look to add to a 4-1 win over Montreal in their last outing. The game was scoreless through the opening 20 minutes before Kris Letang broke the deadlock just over seven minutes into the 2nd period. Jason Zucker doubled the lead for Pittsburgh with two minutes to go in the middle frame, but Montreal would respond just 1:06 later. Zucker would tally his 2nd of the game and restore the two-goal cushion just :36 later and despite being outshot by Montreal 18-8 in the 3rd, the Pens would ice the win with an empty-netter with just under two minutes to go from Zach Aston-Reese to secure the win. Tristan Jarry got the win to improve to 19-8-1 on the year after stopping 34 of 35 shots faced in the winning effort.

Head-to-head, Detroit is 1-4 in the last 5 meetings and 1-5 in the last 6 meetings between these two teams in Pittsburgh.

As nice as the plus money is with Detroit, I’m not trying to figure the Red Wings as you never know when they’re going to get their act together and make the risk worth the reward. Now the Wings have to play the second half of a back-to-back against a Pittsburgh team that’s been winning games left and right, especially on home ice and it’s just now a good lineup to face on a back-to-back. I’ll side with Pittsburgh and to get the price down I’ll take the Penguins on the puck line.