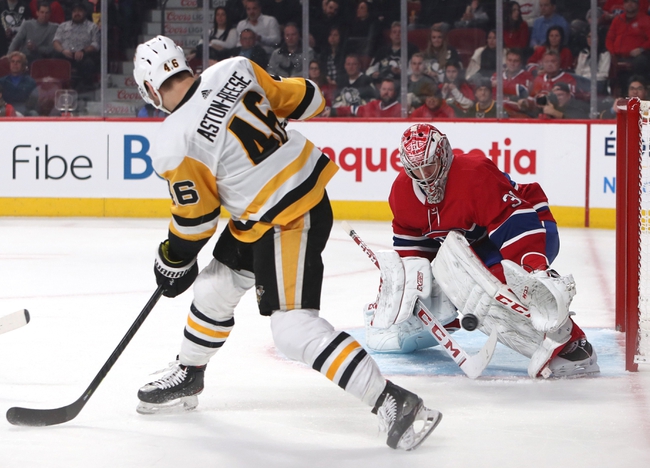 The Montreal Canadiens and the Pittsburgh Penguins meet in NHL action from the PPG Paints Arena on Friday night.

The Montreal Canadiens will look to rebound from back-to-back losses after a 4-1 loss to Boston last time out. Boston opened the scoring just seven minutes into the game before doubling their lead just over four minutes into the 2nd period. Nick Suzuki got Montreal on the board just :36 later but the Bruins would restore the two-goal cushion with just over four minutes to go in the 2nd. Montreal tried to pull one back in the 3rd, but the Canadiens wouldn’t get any closer as Boston added an empty-netter late to secure the win and send Montreal back empty-handed. Carey Price took the loss, falling to 24-20-4 on the year after allowing 3 goals on 37 shots faced in the losing effort.

The Pittsburgh Penguins will look to rebound from a 2-1 overtime loss to the Tampa Bay Lightning in their last outing. Evgeni Malkin opened the scoring for Pittsburgh just after the midway point of the opening period before Tampa Bay tied the game at one just before the four minute mark of the 2nd frame. The rest of the 2nd and the entire 3rd period didn’t produce any more scoring, despite Pittsburgh outshooting the Lightning 16-9 in the 3rd period. We went to overtime, where Tampa Bay found the game winning goal just past the midway point of the extra frame. Matt Murray ended up with the OT loss, falling to 16-7-5 on the year after allowing both goals on 38 shots faced in the losing effort.

The plus money is tempting considering that both teams have six wins in their last ten games and Montreal needs to keep winning games to keep their attempted playoff push going. However, the Habs have needed the wins since the all-star break, and have folded kind of easily in their last couple of games, games that could’ve been huge confidence builders towards that goal of an eventual playoff spot. Pittsburgh lost to Tampa Bay, but with the way the Lightning have played as of late, there’s not a ton of shame in that. Bottom line is side-by-side, the Canadiens aren’t showing up in the bigger games, and I just think that Pittsburgh should be the play here and to get the price down, I’ll side with the Penguins in regulation.