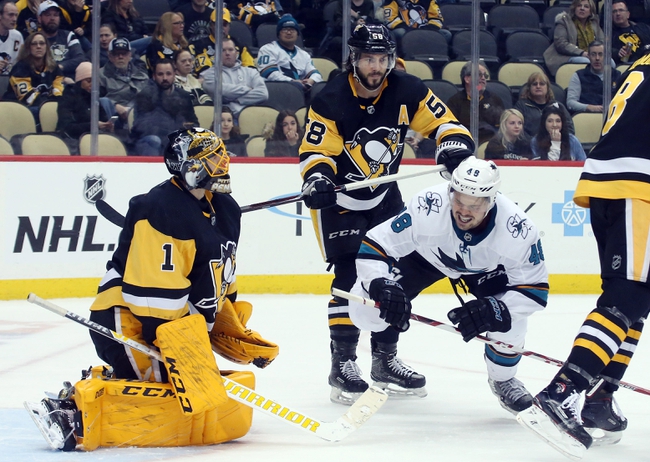 The San Jose Sharks head to Pittsburgh, PA on Thursday for a game against the Penguins in a matchup of teams from the Eastern and Western Conference.  In their last game, the Sharks were defeated by the Detroit Red Wings by the score of 2-0.  The Sharks put 34 shots on net against the Red Wings but were never able to get one past Jonathan Bernier.  Martin Jones recorded the loss in net for the Sharks as he allowed 2 goals on 23 of the Red Wings shots on the night.

The Pittsburgh Penguins welcome the San Jose Sharks to town on Thursday night after winning their last game by the score of 5-2 against the Ottawa Sentors.  Pittsburgh received goals from Jake Guentzel, Patric Hornqvist, Dominik Simon and 2 goals from Evgeni Malkin.  Pittsburgh goalie Tristian Jarry recorded the win in net, making saves on 24 of 26 Ottawa shots on the night.

On the year, the Penguins are 24-11-4 and are currently in 3rd place in the Metropolitan Division. Jake Guentzel leads the Penguins in points with 43 and goals with 20 so far this season.  Evgeni Malkin leads the Penguins in assists on the year with 27.  Pittsburgh has received strong goaltending on the season from both Matt Murray and back up, Tristian Jarry.  On the year, Murray is 11-6-4 with 1 shutout and a 2.96 goals against average, while Jarry is 13-5-0 with 3 shutouts and a 1.88 goals against average. The Penguins currently have 3 players listed on their injury report as Sidney Crosby is on injured reserve while Justin Schultz and Jake Guentzel are listed as out.