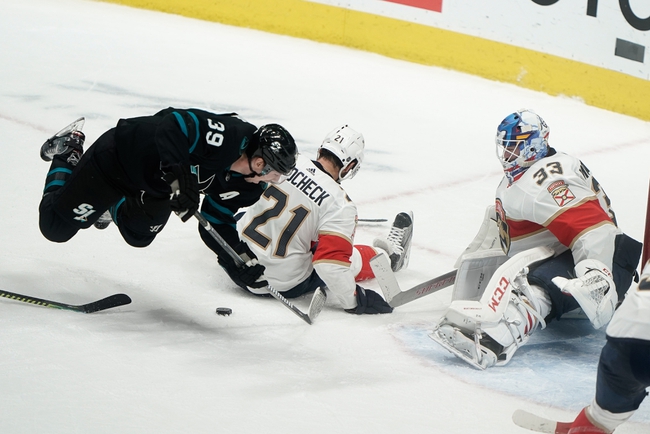 The Florida Panthers and the San Jose Sharks meet in NHL action from the SAP Center on Monday afternoon.

The Florida Panthers will be out to rebound from back-to-back losses after a 4-1 loss to Edmonton last time out. Edmonton opened the scoring with just under five minutes to go in the opening period and the lead would hold up through the entire 2nd period before Edmonton doubled their lead in the opening moments of the 3rd period. Jonathan Huberdeau pulled a goal back for the Panthers just before the nine-minute mark of the period, but despite outshooting the Oilers 15-12 in the 3rd, the Panthers wouldn’t get any closer as Edmonton held on for the win, icing a couple of empty-net goals in a span of 1:12 in the process to lock up the W. Sam Montembault took the loss, falling to 5-3-1 on the year after giving up two goals on 27 shots faced in the losing effort.

The San Jose Sharks will try to build on back-to-back wins after a 2-0 win over Minnesota in their last outing. The game was scoreless through the opening 20 minutes and deadlocked at 0-0 through 40 minutes of play before Dylan Gambrell finaly broke the tie just over three minutes into the 3rd period. Minnesota outshot the Sharks in all 3 periods, including 15-7 in the 3rd, but the Wild wouldn’t find the equalizer as Melker Karlsson sealed the win with an empty-netter with just :15 to go. Martin Jones picked up the win to improve to 14-17-2 on the year after stopping all 39 shots faced in the winning effort for his 1st shutout of the season.

San Jose has been picking up their play lately, so being favored at home makes sense for San Jose. However, Florida is the only team here that’s in relatively close distance of a wild card spot, and a lot of San Jose’s recent success has come on the road. Florida’s also had their way with the Sharks in recent years, and let’s not forget that this is a Panthers team that’s still loaded offensively. I’ll take a shot with the Panthers and the plus money here.