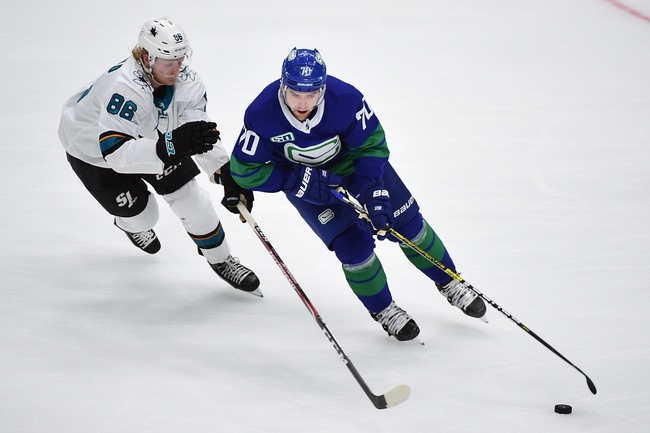 The Vancouver Canucks head to San Jose, CA on Wednesday for a game against the Sharks in a matchup of teams from the Pacific Division in the Western Conference.  In their last game, Vancouver defeated the St. Louis Blues by the score of 3-1.  The Canucks received 2 goals from J.T. Miller and a goal from Bo Horvat on their way to the win.  Vancouver goalie Thatcher Demko started in net and recorded the win as he made saves on 36 of 37 St. Louis shots on the night.

On the year the Canucks are now 28-18-4, which puts them in 1st place in the Pacific Division. Vancouver is lead in points and goals by Elias Pettersson who has recorded 52 points and 21 goals on the year, including 7 goals while on the power play.  Pettersson also leads the Canucks in assists on the year as he has recorded 31 so far this season.  The Canucks have received decent goal play from both of their goalies Thatcher Demko is 10-5-1 with a goals against average of 2.93 on the season while the Canucks’ other goalie Jacob Markstrom is 18-13-3 on the year with 1 shutout and a 2.71 goals against average.  The Canucks enter Wednesday’s game with a clean bill of health as they do not have anyone listed on their injury report.

The San Jose Sharks welcome the Vancouver Canucks to town on Wednesday after winning their last game agains the Anaheim Ducks by the score of 4-2.  The Sharks received 2 goals each from Patrick Marleau and Stefan Noesen on their way to the win.  Aaron Dell recorded the win in net for the Sharks as he made saves on 26 of 28 Anaheim shots on the night.

The Vancouver Canucks have scored 3.24 goals per game this season while allowing 2.98 goals per game.  The San Jose Sharks have scored 2.59 goals per game this year while allowing 3.29 goals per game.  In their last 5 games, the Canucks are 4-1 and have won 3 games in a row while the Sharks are 2-3.  The Canucks currently lead the season series against the Sharks by the score of 2 games to 1.  Vancouver has won by the scores of 5-2 and 4-1 while San Jose won 4-2 in their victory.  The total has gone under in 5 of Vancouver's last 5 games. The total has gone under in 8 of San Jose's last 11 games. San Jose is 8-1 in their last 9 games when playing at home against Vancouver. I look for the Canucks to come out of this one with a victory.  Vancouver wins 5-2.