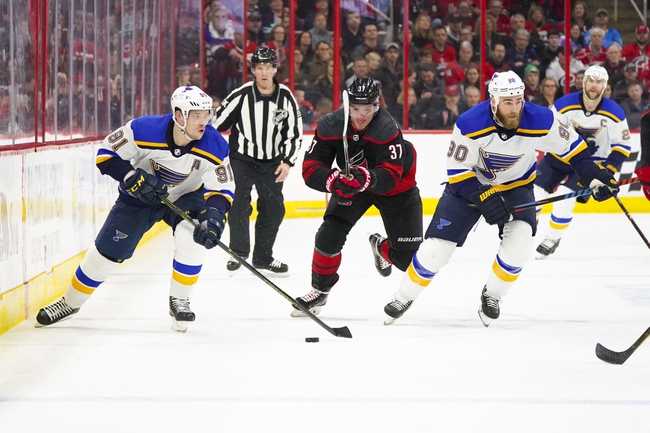 In the Blues loss to the Jets, St. Louis out shot the Jets, 40 to 33.  The Blues were out hit by the Jets, 16 to 14.  St. Louis had goals from: Brayden Schenn and Ryan O'Reilly.  Jordan Binnington was in goal for the Blues, turning away 28 shots, out of a possible 31 saves.

Hurricanes are 1-4 SU in their last 5 games against St. Louis.

Hurricanes are 2-5 SU in their last 7 road games in St. Louis.

The under is 7-2 in Hurricanes last 9 games.

The Hurricanes are playing better recently than the Blues, as Carolina has won 3 of their last 4.  The Blues struggled on their road trip through Canada, going 1-4.  St. Louis will be glad to be back at home, where the Blues have posted a 17-4-4 record at home.  The Blues scoring defense has faltered as of late, while the Hurricanes rank 4th in scoring defense.  The Hurricanes have struggled in St. Louis and against the Blues in general in recent games.  St. Louis has been great at home.  I look for the Blues to get back on track at home, as Coach Craig Berube probably amped up the practice on Monday.  Final score prediction, Blues will win 3-1.