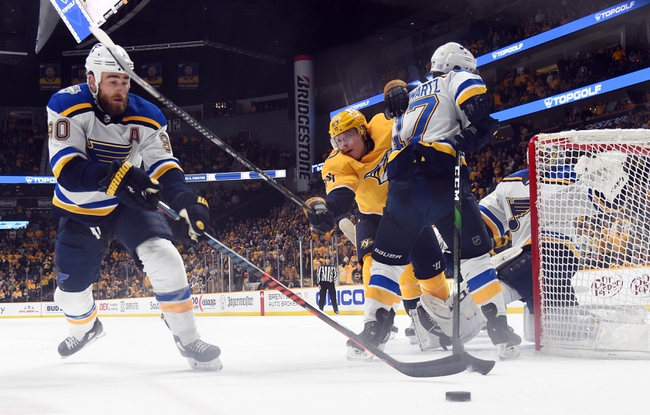 The Nashville Predators and the St. Louis Blues meet in a Central division matchup in NHL action from the Enterprise Center on Saturday afternoon.

The Nashville Predators will look to build off of a 5-0 win over the New York Islanders last time out. Craig Smith opened the scoring for Nashville just :35 into the game before doubling the lead and his tally just over seven minutes later. Mattias Ekholm pushed Nashville’s lead to 3-0 before the end of the opening period before Rocco Grimaldi made it 4-0 less than five minutes into the 2nd and Smith would complete his had trick with just over eight minutes to go in the middle period. The Predators got little resistance the rest of the way, as the Islanders mustered up just four shots on goal in the 3rd period as Nashville cruised to the win. Juuse Saros got the win to improve to 10-9-4 on the year after stopping all 31 shots faced in the winning effort for his 2nd shutout of the season.

The St. Louis Blues will be out to snap a three-game losing streak after a 6-5 overtime loss to Vegas last time out. Zach Sanford opened the scoring for the Blues just :25 into the game but Vegas would tie the game just 1:34 later and would take the lead less than five minutes after that. Sanford would tie the game at two just 3:07 later with his 2nd goal of the game and MacKenzie MacEachern helped St. Louis re-take the lead late in the opening frame. Sanford would push the lead to 4-2 just over five minutes into the 2nd by completing his hat trick but Vegas would pull one back with just over a minute to play in the 2nd and would tie the game early on in the 3rd. Sanford added his 4th tally of the night to give St. Louis a 5-4 lead, but Vegas would tie the game again with just under five minutes to go. The rest of the 3rd solved nothing, so it was off to OT where the Golden Knights found the game winner just after the midway point of the extra frame. Jordan Binnington took the loss, falling to 24-10-7 on the year after giving up all 6 goals on 52 shots faced in the losing effort.

I’m tempted by Nashville and the plus money as the Preds have been playing the much better hockey as of late, and it’s not often you’ll see St. Louis drop eight of their last ten games. However, a lot of St. Louis’ recent struggles have come on the road, and at home, the Blues just know how to turn it on and are almost a completely different team. I think this is a spot where the Blues wake up and bounce back into form, so I’ll lay the juice with St. Louis in this one.