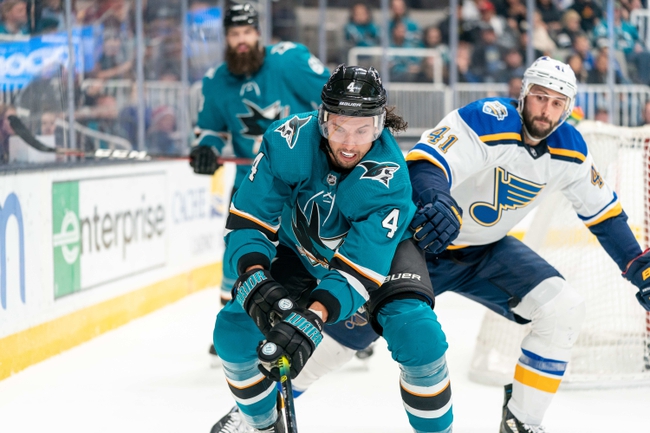 In the Sharks loss to the Capitals, San Jose and Washington each had 29 shots on goal.  The Sharks had goals from: Evander Kane (3) and Logan Couture.  The Sharks blew a 2 goal lead, as the Capitals scored 2 goals in the last minute to send the game to OT.  The Sharks were out hit, 19 to 18.  Martin Jones was in goal for the Sharks, giving up 5 goals on 29 shots.

In the Blues loss to the Golden Knights, St. Louis was out shot, 33 to 31.  The Blues had goals from: Alex Pietrangelo, Jaden Schwartz, Oskar Sundqvist, and David Perron.  The Blues blew a 3-0 first period lead.  Two former Blues scored for Vegas in their win.  St. Louis was out hit, 37 to 29 in the game.  Jake Allen was in goal for the Blues, stopping 28 of 33 shots.

The Sharks are 0-4 in the last 4 matchups with the Blues and are 1-4 in the last 5 meetings in St. Louis.  The Sharks have won 2 of their last 4. while the Blues have dropped 3 in a row.  The Blues did manage to salvage a point in the last game.  The Sharks have the 27th worse scoring defense in the league, the Blues are very capable of putting up big numbers.  San Jose also ranks 26th in offense.  I'll side with St. Louis at home to end this skid.  Final score prediction, Blues win 4-2.