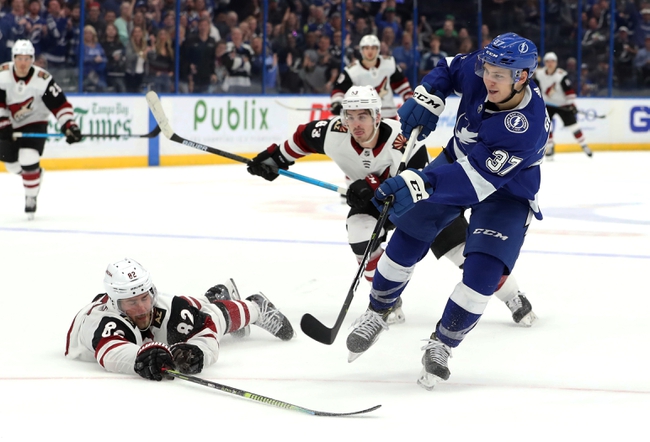 The Arizona Coyotes go to Tampa, Florida to take on the Tampa Bay Lightning on Thursday at the Amalie Arena. The Arizona Coyotes are coming off of a four-game winning streak, defeating the Florida Panthers, St. Louis Blues, Anaheim Ducks, and the Philadelphia Flyers.

Arizona is 25-16-4 on the season, and have an excellent record on the road, being 13-6-3. Much of their success has to do with their goalkeeper Darcy Kuemper, who had the best goals allowed average in all of the NHL before the game against Minnesota. However, Kuemper will be out with an injury at the moment, and now the Coyotes will have to improve their defense to make sure they do not start leaking goals. Since Kuemper has been out, Arizona has been inconsistent, but they are beginning to find a rhythm without Kuemper, and now might be able to get back on track.

The Lightning is playing unbelievable right now, and now have a record of 25-13-4 on the season. Tampa Bay is currently third in the Atlantic Division. The Tampa Bay Lightning are one of the best offensive teams in all of the NHL, scoring the fourth-most goals in the NHL and play the most power play, playing 29.2% on power plays.