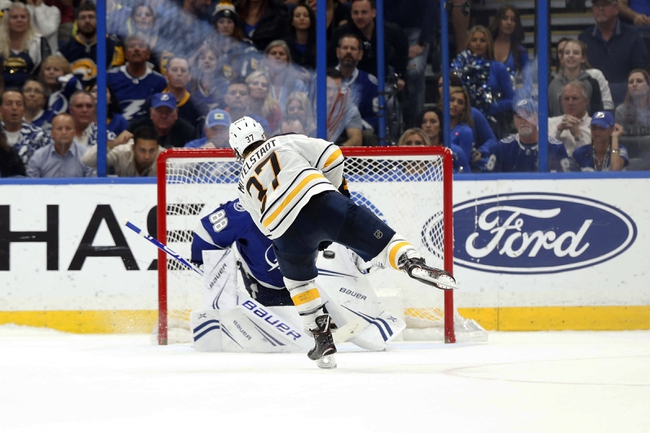 On Saturday, the Buffalo Sabres will play their second game of a home and home set against the Tampa Bay Lightning in Stockholm, Sweden in the second game of their NHL Global Series matchup.  In game one of the series, Tampa Bay defeated Buffalo by the score of 3-2.  The Lightning goals were scored by Nikita Kucherov, Alex Killorn and Yanni Gourde.  Meanwhile, the Buffalo goals were both scored by Sam Reinhart. Tampa Bay goalie Andrei Vasilevskiy allowed 2 goals on 22 shots while Buffalo goalie Linus Ullmark allowed 3 goals on 34 shots.

After the loss against the Lightning on Friday, the Sabres are now 9-5-1 on the season and have lost 4 games in a row and 5 of their last 6. Offensively the Sabres are led by Jack Eichel, who has recorded team highs in points with 17, goals with 7, and assists at 10. Four of Eichel’s goals have come while on the power play as well as recording 5 assists while on the man advantage and he is clearly Buffalo’s biggest offensive threat. The goaltenders have played well for Buffalo, Carter Hutton is 6-2-1 with 2 shutouts and a goals against average of 2.09. Backup Linus Ullmark is now 3-2-1 on the season with 1 shutout and a 3.12 goals against average.  Buffalo enters Saturday’s game against Tampa Bay on a healthy note as no one is listed on their injury report.

After the game on Friday, the Tampa Bay Lightning have a record of 7-5-2 for a total of 16 points on the season and are currently in 6th in the Atlantic division.  Steven Stamkos leads the Lightning in points with 13, goals with 5, including 3 coming on the power play and assists as he has recorded 8 on the season.  Lighting goalie Andrei Vasilevskiy is currently 5-4-0 on the season with a goals against average of 3.12 and a save percentage of .904.  Backup goalie Curtis McElhinney is 1-1-2 on the season with a 3.94 goals against average and a save percentage of .899.  Tampa Bay comes into the game on a healthy note as they have just 1 player listed on their injury report as Victor Hedman is on injured reserve.