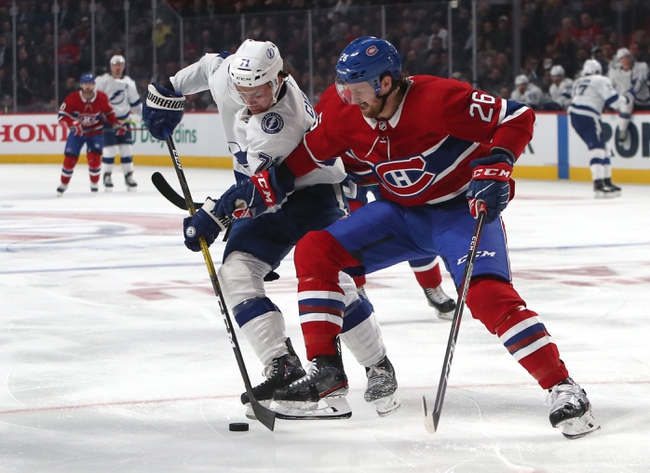 The Montreal Canadiens head to Tampa, Florida on Saturday for a game against the Tampa Bay Lightning in a battle of two teams from the Atlantic Division.  In their last game, Montreal defeated the Winnipeg Jets by the score of 6-2.  The Canadiens received goals from Max Domi, Artturi Lehkonen, and 2 goals each from Phillip Danault and Tomas Tatar.  Montreal goalie Carey Price was solid in net for the Canadiens and picked up the win as he made saves on 27 of 29 Jets shots in the game.

After the win against Winnipeg, Montreal is 18-13-6 which puts them in a 3rd place in the Atlantic Division.  The Canadiens are led in points by Tomas Tatar as he has recorded 32 points on the season.  Tatar also leads Montreal in goals this season with 15.  The assists leader for Montreal is Shea Weber who has recorded 19 on the year.  Goalie Carey Price is currently 16-11-3, with 1 shutout on the season and has a goals against average of 2.86.  Montreal enters their game against Tampa Bay with 2 players listed on their injury report as Jesperi Kotkaniemi is on injured reserve and Joel Armia is listed as day to day.

The Tampa Bay Lightning welcome the Montreal Canadiens to town after winning their last game 6-1 in a blowout win against the Florida Panthers.  Tampa Bay received goals from Brayden Point, Mikhail Sergachev, Alex Killorn, Nikita Kucherov and 2 goals from Victor Hedman in the win.  Andrei Vasilevskiy got the win in net for the Lightning as he made 29 saves on 30 of the Panthers shots.

After the win against Florida, the Lightning are now 18-13-4, good enough for 6th in the Atlantic Division.  Nikita Kucherov leads Tampa Bay in points with 40 and in assists with 27.  Brayden Point is the leading goal scorer for the Lightning as he has scored 14 goals on the year with 6 coming while on the power play.  Lighting goalie Andrei Vasilevskiy is currently 15-9-2 on the season with a goals against average of 2.81. Backup goalie Curtis McElhinney is 3-4-2 on the season with a 3.45 goals against average. Tampa Bay comes into the game with 1 player listed on their injury report as Tyler Johnson is listed as day to day.

The Montreal Canadiens have scored an average of 3.22 goals per game on the year while allowing 3.14 goals per game.  The Tampa Bay Lightning have scored 3.51 goals per game this season while allowing 3.17 goals per game.  In their last 5 games, the Canadiens are 3-2 while the Lightning are 2-3.  In the first meeting of the season between these two teams, the Lightning came out on top by the score of 3-1 in a game played in Montreal.  I am going with Tampa Bay in this one as they have won 2 of their last 3 games against Montreal, including the game played earlier this season and have outscored the Canadiens by an average score of 2.67 to 1.67 in the 3 games.  Tampa Bay wins 3-2.