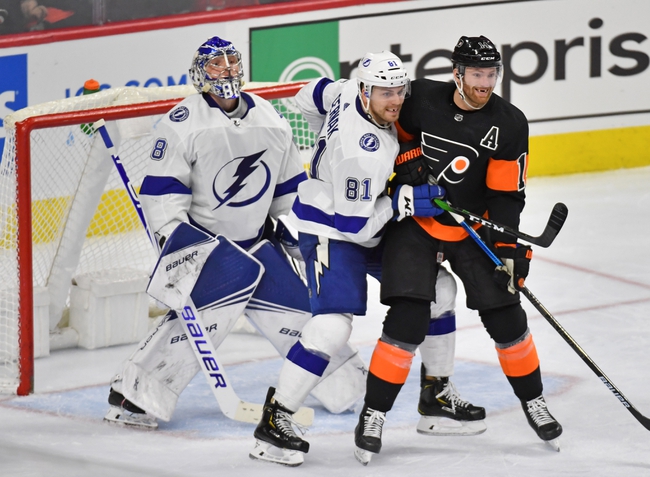 The Philadelphia Flyers and the Tampa Bay Lightning meet in NHL action from the Amalie Arena on Saturday afternoon.

The Philadelphia Flyers come into this one looking to build on a 6-2 win over the Florida Panthers last time out. James van Riemsdyk opened the scoring just over four minutes into the game before Tyler Pitlick and Nicolas Aube-Kubel scored :55 apart to push Philly’s lead out to 3-0. Scott Laughton made the Flyers’ lead 4-0 with the lone goal of the 2nd with a minute to go in the middle frame but Florida would make things interesting with a pair of goals within the first five minutes of the 3rd period. However, 4-2 was as close as the Panthers would get as Philadelphia restored the four-goal cushion with goals from Sean Couturier and Robert Hagg less than five minutes apart later in the 3rd to secure the win and the 6-2 final. Carter Hart got the win to improve to 17-11-3 on the year after stopping 26 of 28 shots faced in the winning effort.

The Tampa Bay Lightning will look to add to their nine-game winning streak after a 3-1 win over Edmonton last time out. The game was scoreless through the opening 20 minutes before Patrick Maroon got the Bolts on the board first just under five minutes into the 2nd period. Edmonton tied the game just before the midway point of the 2nd but Yanni Gourde would give Tampa Bay the lead back just over four minutes later. Tampa Bay would ride that lead through the 2nd and most of the 3rd and despite Edmonton outshooting Tampa Bay 13-10 in the 3rd, the Oilers wouldn’t get any closer as Cedric Paquette locked up the W with an empty-netter in the last minute of the game. Andrei Vasilevskiy got the win to improve his record to 31-9-3 on the year after stopping 29 of 30 shots faced in the winning effort.

Head-to-head, Philadelphia is just 2-11 in the last 13 meetings between these two teams in Tampa Bay.

The Flyers looked really good against the Panthers last time out, but the fact remains, and it’s not a secret, that the Flyers are nowhere near the same team on the road that they are at home. If we’re being honest, considering the lines we’ve got on Tampa Bay in the past, combined with the fact that the Bolts are on another nine-game winning streak, the price isn’t that bad. I’ll side with Tampa Bay in regulation to get the price down a little bit more here.