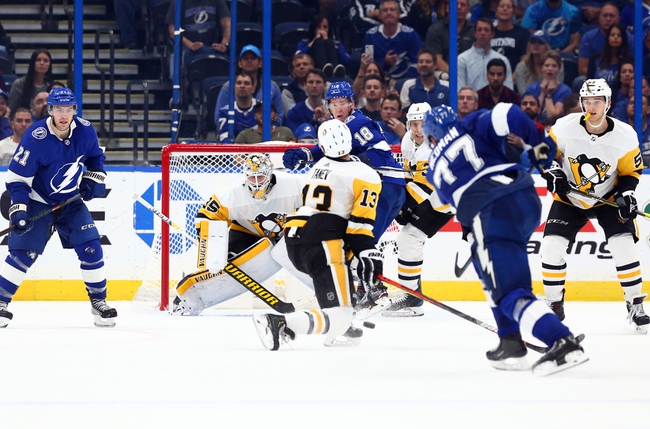 The Pittsburgh Penguins head to Tampa, FL on Thursday for a game against the Lightning in a matchup of teams in the Eastern Conference.  In their last game, the Penguins defeated the Washington Capitals by the score of 4-3.  Pittsburgh received goals from Sam Lafferty, Patric Hornqvist, Dominik Simon and Brandon Tanev.  Pittsburgh goalie Matt Murray recorded the win in net, making saves on 29 of the 32 Capitals shots on the night.

On the year, the Penguins are 33-14-5 and are currently in 2nd place in the Metropolitan Division. Evgeni Malkin leads the Penguins in points and assists on the year with 54 points and 38 assists.  Bryan Rust leads Pittsburgh in goals with 22.  Pittsburgh has received strong goaltending on the season from both Matt Murray and back up, Tristian Jarry.  On the year, Murray is 16-6-4 with 1 shutout and a 2.85 goals against average, while Jarry is 17-8-1 with 3 shutouts and a 2.19 goals against average. The Penguins come into Thursday’s game with 2 players listed on their injury report as Dominik Kahun is day to day while Nick Bjugstad is on injured reserve.

The Tampa Bay Lightning welcome the Pittsburgh Penguins to town on Thursday night after winning their last game against the Vegas Golden Knights by the score of 4-2. Tampa Bay received goals from Steven Stamkos, Alex Killorn, Tyler Johnson and Brayden Point on their way to the victory.  Andrei Vasilevskiy recorded the win in net for the Lightning as he made saves on 27 of the 29 shots he faced against Vegas.

After the win against Vegas, the Lightning are now 33-15-5, good enough for 2nd in the Atlantic Division.  Nikita Kucherov leads Tampa Bay in points with 63 and in assists with 39.  Kucherov is also the leading goal scorer for the Lightning as he has scored 24 goals on the year with 4 coming while on the power play.  Lighting goalie Andrei Vasilevskiy is currently 27-9-3 on the season with 2 shutouts and a goals against average of 2.53. Backup goalie Curtis McElhinney is 6-6-2 on the season with 1 shutout and a 2.88 goals against average. Tampa Bay comes into the game with 1 player listed on their injury report as Jan Rutta is out.