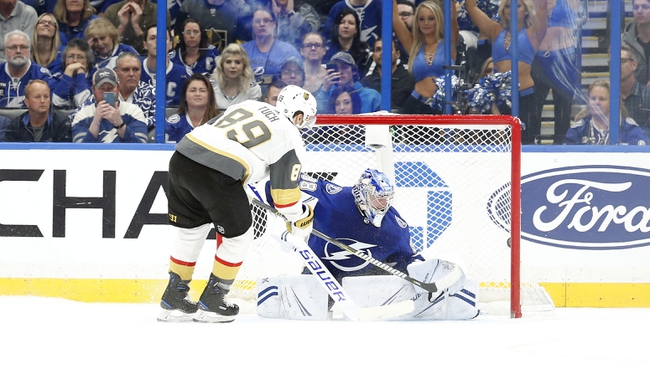 The Vegas Golden Knights travel to Tampa, FL on Tuesday for a game against the Tampa Bay Lightning in a matchup of teams from the Western and Eastern Conference.  In their last game, Vegas defeated the Nashville Predators by the score of 3-0.   The Golden Knights received goals from Chandler Stephenson, Nicolas Roy and Reilly Smith on their way to the victory.  Marc-Andre Fleury started in net for Vegas and recorded the win, making saves on all 19 of the Predators shots that he faced.

After the win against Nashville, Vegas is now 27-20-7 and are currently in 3rd place in the Pacific Division.  Max Pacioretty leads the Golden Knights in points on the year with 48.  Pacioretty also leads Vegas in goals with 21 on the season, with 5 goals coming while on the power play. Mark Stone leads Vegas in assists with 30 on the season.  Vegas goalie Marc-Andre Fleury is currently 20-12-4 with 3 shutouts and a goals against average of 2.78 this season.  Meanwhile, backup goalie Malcolm Subban is 7-7-3 with a goals against average of 3.04. The Knights come into Tuesday’s game with a clean bill of health as they do not have anyone listed on their injury report.

The Tampa Bay Lightning welcome the Vegas Golden Knights to town on Tuesday night after winning their last game against the San Jose Sharks by the score of 3-0. Tampa Bay received goals from Steven Stamkos, Nikita Kucherov and Ondrej Palat on their way to the victory.  Curtis McElhinney recorded the win in net for the Lightning as he made saves on all 30 shots that he faced from San Jose.

After the win against San Jose, the Lightning are now 32-15-5, good enough for 2nd in the Atlantic Division.  Nikita Kucherov leads Tampa Bay in points with 61 and in assists with 37.  Kucherov is also the leading goal scorer for the Lightning as he has scored 24 goals on the year with 4 coming while on the power play.  Lighting goalie Andrei Vasilevskiy is currently 26-9-3 on the season with 2 shutouts and a goals against average of 2.55. Backup goalie Curtis McElhinney is 6-6-2 on the season with 1 shutout and a 2.88 goals against average. Tampa Bay comes into the game at full strength as they do not have anyone listed on their injury report.