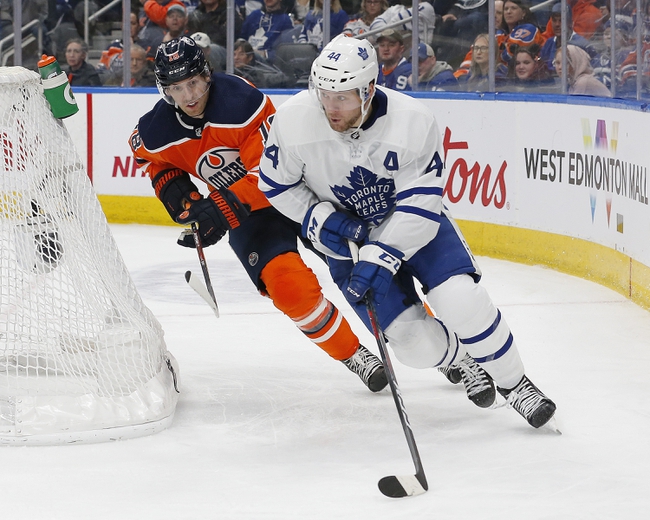 The Edmonton Oilers head to Toronto, Ontario on Monday for a game against the Maple Leafs in a matchup of teams from north of the boarder.  In their last game, the Oilers defeated the Boston Bruins by the score of 4-1. The Oilers received goals from Gaetan Haas, Darnell Nurse, Connor McDavid and Leon Draisaitl on their way to the win.  Edmonton goalie Mike Smith recorded the win in net for the Oilers as he made saves on 35 of the 36 shots he faced against Boston.

After the win against Boston, Edmonton is now 22-17-5 on the season and is currently in 4th place in the Pacific Division.  The Edmonton offense runs through Leon Draisaitl who leads the Oilers in points with 65 and goals with 24 on the season.  The leader in assists for the Oilers is Connor McDavid who has recorded 42 assists this year.  Edmonton’s goalies have been decent overall so far on the year with Mike Smith recording a record of 8-9-3, with 1 shutout and goals against average of 3.01.  Mikko Koskinen has a record of 14-8-2 with 1 shutout and a goals against average of 2.85. Edmonton enters Monday’s game with a clean bill of health as they do not have anyone listed on their injury report.

The Toronto Maple Leafs welcome the Edmonton Oilers to town on Monday, looking to stay hot and add another win to their total on the season.  In their last game, the Maple Leafs dominated the New York Islanders, winning by the score of 3-0.  Toronto received goals from Auston Matthews, Zach Hyman and Pierre Engvall on their way to the win.  Maple Leafs goalie Michael Hutchinson got the win in net for Toronto as he recorded 33 saves on 33 of the Islanders shots in the game, recording his first shutout of the season.

On the season, the Maple Leafs are currently 24-14-5 and are currently in 2nd place in the Atlantic Division.  Austin Matthews leads Toronto in points with 51 and goals with 28. Mitch Marner leads Toronto in assists on the season with 29. Goalie Frederick Anderson is 21-8-4 on the season with 1 shutout and a 2.67 goals against average. Backup goalie Michael Hutchinson is 3-5-1 with 1 shutout and a goals against average of 3.59.  Toronto enters Monday’s game with 2 players listed on their injury report as Andreas Johnsson and Trevor Moore are both on injured reserve.

The Edmonton Oilers have scored 2.93 goals per game on the season while allowing 3.11 goals per game.  The Toronto Maple Leafs have scored 3.58 goals per game on the year while allowing 3.09 goals per game.  In their last 5 games, the Oilers are 2-3 while the Maple Leafs are 4-1 and have won 3 games in a row.  In the last meeting of these two teams, Toronto came away with the win by the score of 4-1 in a game played in Edmonton.  The total has gone under in 4 of Edmonton's last 5 games on the road. The total has gone over in 6 of Toronto's last 9 games.  Toronto is 7-0 in their last 7 games when playing at home against Edmonton.  I am going with the Maple Leafs in this one.  Toronto wins 4-3.