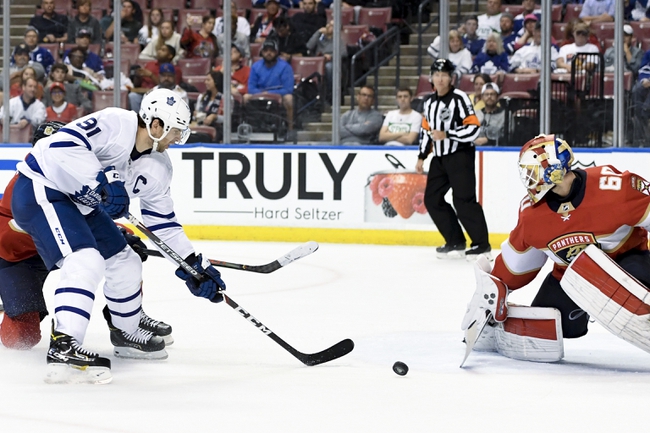 The Florida Panthers travel to Toronto, ON on Monday for a game against the Maple Leafs in a matchup of teams from the Atlantic Division in the Eastern Conference.  In their last game, Florida was defeated by the Montreal Canadiens by the score of 4-0.  The Panthers were able to put 29 shots on goal against Canadiens goalie Carey Price, but were never able to get one past him.  Panthers goalie Sergei Bobrovsky started in net and recorded the loss, allowing 4 goals on 35 of Montreal’s shots in the game.

The Panthers are now 28-17-5 on the season which puts them in 4th place in the Atlantic Division. Jonathan Huberdeau leads Florida in points with 65 and in assists with 47 on the season.  Evgenii Dadonov leads Florida in goals as he has recorded 23 so far this year with 10 coming while on the power play.  Panthers goalie Sergei Bobrovsky is 19-13-4 with 1 shutout and a 3.26 goals against average.  Florida’s other goalie, Chris Driedger is 5-2-0, with 1 shutout and a goals against average of 2.35. Florida enters Monday’s game with 2 players listed on their injury report as Chris Driedger is out and Aleksander Barkov is day to day.

The Toronto Maple Leafs welcome the Florida Panthers to town on Monday, looking to stay hot and add another win to their total on the season.  In their last game, the Maple Leafs defeated the Ottawa Senators by the score of 2-1 in overtime.  Toronto received goals from Jason Spezza and Mitch Marner, who both scored on the power play on their way to the win.  Maple Leafs goalie Michael Hutchinson got the win in net for Toronto as he recorded 24 saves on 25 of the Senators shots in the game.

On the season, the Maple Leafs are currently 28-17-7 and are currently in 3rd place in the Atlantic Division.  Austin Matthews leads Toronto in points with 61 and goals with 36. Mitch Marner leads Toronto in assists on the season with 37. Goalie Frederick Anderson is 24-9-6 on the season with 1 shutout and a 2.87 goals against average. Backup goalie Michael Hutchinson is 4-7-1 with 1 shutout and a goals against average of 3.56.  Toronto enters Monday’s game with 2 players listed on their injury report as Travis Dermott and Kasperi Kapanen are both listed as out.