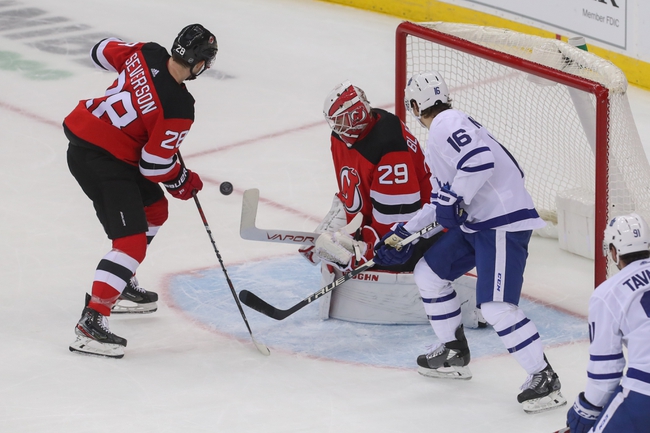 The New Jersey Devils travel to Toronto, Ontario on Tuesday for a game against the Maple Leafs in a matchup of teams from the Eastern Conference.  In their last game, the Devils defeated the Tampa Bay Lightning by the score of 3-1.  New Jersey received goals from Andy Greene, Travis Zajac and Miles Wood on their way to the win against Tampa Bay.  Devils’ goalie Louis Domingue recorded the win in net for his team as he made 26 saves on 27 Lightning shots on the night.

After the win against Tampa Bay, the Devils are now 17-21-7 on the season which places them in 8th place in the Metropolitan Division.  Kyle Palmieri leads the Devils in points with 31 as well as goals with 16 so far on the season. Nikita Gusev leads the Devils in assists on the year with 19.  Goalie Mackenzie Blackwood is 14-12-6 with 1 shutout and a 2.97 goals against average.  Backup goalie Louis Domingue is 3-4-0 with a goals against average of 3.07.  Goalie Cory Schneider is also active for the Devils as he has a record of 0-4-1 with a goals against average of 4.59.  New Jersey enters Tuesday’s game with 5 players listed on their injury report as Kyle Palmieri and Mackenzie Blackwood are listed as out, Ben Street is on injured reserve and Jesper Bratt and Jack Hughes are listed as day to day.

The Toronto Maple Leafs welcome the New Jersey Devils to town on Tuesday, looking to get back on track and add another win to their total on the season.  In their last game, the Maple Leafs were defeated by the Florida Panthers by the score of 8-4.  Toronto received goals from Zach Hyman, John Tavares and 2 goals from Mitch Marner, but it wasn’t enough to come out on top.  Both Maple Leafs goalies saw action in the game with Frederick Anderson allowed 4 goals on 12 shots and Michael Hutchinson allowed 4 goals on 17 shots on the night.

On the season, the Maple Leafs are currently 24-16-6 and are currently in 3rd place in the Atlantic Division.  Austin Matthews leads Toronto in points with 54 and goals with 31. Mitch Marner leads Toronto in assists on the season with 31. Goalie Frederick Anderson is 21-8-5 on the season with 1 shutout and a 2.82 goals against average. Backup goalie Michael Hutchinson is 3-7-1 with 1 shutout and a goals against average of 3.83.  Toronto enters Tuesday’s game with 2 players listed on their injury report as Andreas Johnsson is day to day while Jake Muzzin is on injured reserve.