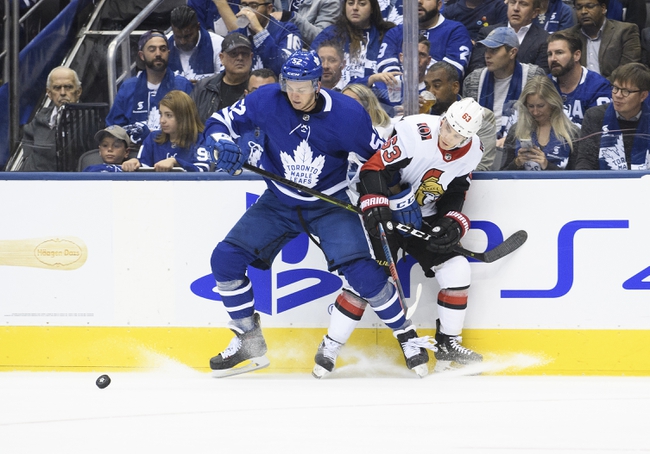 The Ottawa Senators go to Toronto, Ontario, Canada, to take on the Toronto Maple Leafs on Saturday at the Scotiabank Arena. The Senators are coming off of a win over the Buffalo Sabres, and have been inconsistent in their last few games, but have gone on a ten-game losing streak just a few games ago.

The Ottawa Senators have certainly struggled this season, and they are currently 18-23-9 on the season but have been terrible on the road, with a record of 6-15-4 away from their arena. The bright spot for the Ottawa Senators is their leading goal scorer and points getter, Anthony Duclair, who has been terrific this season, scoring 33 points and 21 goals. The Senators are still attempting to shake what was one of the worst runs in all of the NHL recently.

The Maple Leafs are coming off of a two-game winning streak, last defeating the Dallas Stars as well as a win over the Nashville Predators, snapping a two-game losing streak. The Maple Leafs have won three of their last five games.

The Maple Leafs have slipped recently but still find themselves fourth in the Atlantic Division. The Maple Leafs have a ton of talent on their roster as they have two players selected to the NHL All-Star Game, Auston Matthews and Goalie Frederik Anderson. Matthews has helped the Maple Leafs become the most prolific offense in the NHL at the moment, with the most goals this season with 185. However, the Maple Leafs have one of the worst defenses in the league and need to improve their defense to become an elite side.

I don't know how much better the Ottawa Senators are from their terrible losing streak, as they still are inconsistent losing just about every other game. The Toronto Maple Leafs, on the other hand, is one of the best teams in all of the NHL, and if they are able to strengthen their defensive side, they could rival the best team in all the NHL with their elite offense and Auston Matthews leading them. I think that due to the high-powered offense of the Toronto Maple Leafs, they will win this game easily. Final Score Prediction, Toronto Maple Leafs win 4-1.