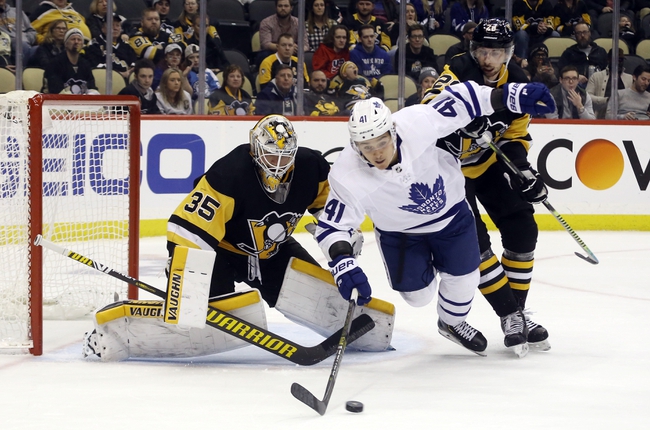 The Pittsburgh Penguins and the Toronto Maple Leafs meet in the second leg of a home-and-home set in NHL action from Scotiabank Arena on Thursday night.

The Pittsburgh Penguins will look to sweep the set while Toronto will try to earn a split as Tuesday’s first leg saw Pittsburgh extend their winning streak to three games with a 5-2 win last time out. Pittsburgh opened the scoring just after the midway point of the opening period when Bryan Rust scored on the power play followed by Anthony Angello’s first NHL goal with just under three minutes to play in the 1st.

Jason Zucker made it 3-0 less than three minutes into the 2nd before Sidney Crosby added a 4th just 4:19 later and Teddy Blueger made it 5-0 later in the 2nd. Auston Matthews and Kyle Clifford would pull a pair back for Toronto just 1:26 apart in the 3rd, but that’s as close as Toronto would get as Pittsburgh ended up slamming the door shut the rest of the way, holding Toronto at bay as the 5-2 score line held up. Tristan Jarry got the win to improve to 20-8-1 after stopping 34 of 36 shots faced in the winning effort for Pittsburgh while Frederik Andersen took the loss in goal for the Leafs after allowing 5 goals on 24 shots faced in the losing effort, dropping to 24-12-6 this season.

Head-to-head, Pittsburgh is 1-4 in the last 5 meetings between these two teams in Toronto.

The plus money is extremely tempting with Pittsburgh given how well the Penguins have been playing lately and how the Pens owned Toronto on Tuesday night. However, living in the Toronto media market, I can tell you, the Leafs are under a ton of scrutiny and it doesn’t exactly make you happy when the head coach does nothing but call out your lack of effort in the post game press conference. I think we see a different Toronto team here, one playing with a bit of an edge after being reamed out since the loss last time out and having to deal with a ticked off coach in practice the next morning. The reality is the Leafs are far from safe in the playoff race right now and Toronto really needs to step their game up to build some positive vibes going forward. I’ll lay the juice with Toronto here but it’s a lean at best.