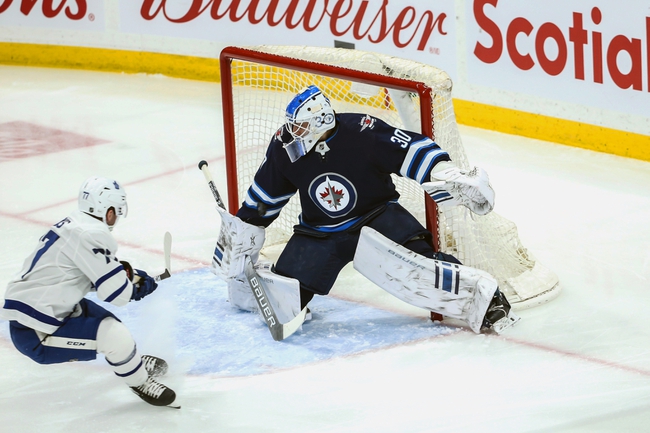 The Winnipeg Jets head to Toronto, ON on Wednesday for a game against the Maple Leafs in a matchup of two Canadian teams.  The Jets come into their game on Wednesday after winning their last game against the Montreal Canadiens by the score of 3-2.  Winnipeg received goals from Josh Morrissey, Nikolaj Ehlers and Andrew Copp on their way to the win.  Connor Hellebuyck started in net for the Jets and recorded the win, making saves on 29 of the 31 Montreal shots that he faced.

The Winnipeg Jets are now 23-16-4 on the season, good enough for 4th place in the Central Division. The Jets are led in points by Mark Scheifele who has totaled 48 on the season.  Scheifele also leads Winnipeg in assists on the season with 28.  Kyle Connor leads the Jets in goals so far this year as he has tallied 21, including 7 while on the power play.  The Jets have received solid goaltending all season from goalie Connor Hellebuyck who has a record of 19-12-4 to go along with 3 shutouts and a goals against average of 2.69.  Backup goalie Laurent Brossoit is currently 4-4-0 on the season with a goals against average of 3.50. The Jets come into Wednesday’s game with 4 players listed on their injury report as Nathan Beaulieu, Andrew Copp, Bryan Little and Dmitry Kulikov are all listed on injured reserve.

The Toronto Maple Leafs welcome the Winnipeg Jets to town on Wednesday, looking to get back on track and add another win to their total on the season.  In their last game, the Maple Leafs were defeated by the Edmonton Oilers by the score of 6-4.  Toronto received goals from Auston Matthews, Pierre Engvall, Frederik Gauthier and Jason Spezza, but it wasn’t enough to come out on top.  Both Maple Leafs goalies saw action in the game with Frederick Anderson allowed 3 goals on 19 shots and Michael Hutchinson allowed 3 goals on 16 shots on the night.

On the season, the Maple Leafs are currently 24-15-5 and are currently in 2nd place in the Atlantic Division.  Austin Matthews leads Toronto in points with 52 and goals with 29. Mitch Marner leads Toronto in assists on the season with 30. Goalie Frederick Anderson is 21-8-4 on the season with 1 shutout and a 2.73 goals against average. Backup goalie Michael Hutchinson is 3-6-1 with 1 shutout and a goals against average of 3.68.  Toronto enters Wednesday’s game with 2 players listed on their injury report as Andreas Johnsson and Trevor Moore are both on injured reserve.