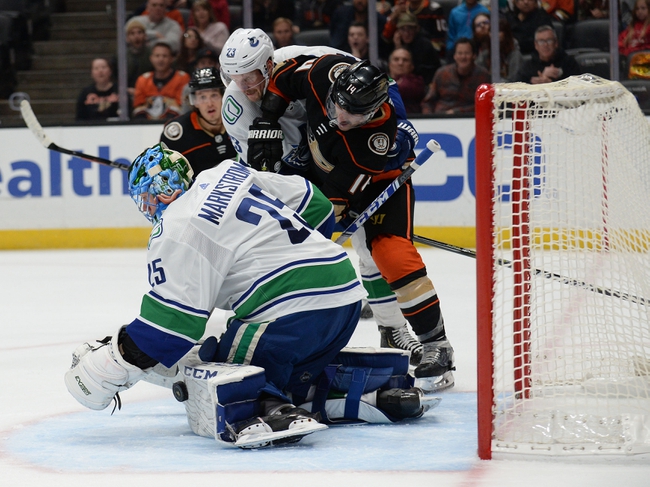 The Anaheim Ducks and the Vancouver Canucks meet in NHL action from the Rogers Arena on Sunday afternoon.

The Anaheim Ducks will look to rebound from a 6-0 loss to the Calgary Flames last time out. Calgary jumped on Anaheim early and often, opening the scoring just over eight minutes into the game before going ahead 3-0 with a pair of goals 1:29 apart. The Flames added a 4th goal with just under a minute to go in the opening period before adding another in the 2nd period and one more for good measure in the 3rd frame. Troy Terry led Anaheim with 9 shots on goal while Adam Henrique and Rickard Rakell each had 4 shots on goal in the losing effort. John Gibson took the loss, falling to 16-22-4 on the year after allowing 4 goals on 16 shots before being pulled late in the 1st period.

The Vancouver Canucks will look to build on back-to-back wins after a 3-0 win over Chicago in their last outing. Bo Horvay opened the scoring for Vancouver with just over four minutes ot go in the opening period before Adam Gaudette doubled the lead just over six minutes into the 2nd period. The 2-0 lead would hold up through all of the 2nd and most of the 3rd before Brandon Sutter added an empty-netter to lock up the win with just 2:09 to play. Jacob Markstrom picked up the win to improve to 22-16-3 on the year after stopping all 49 shots faced in the winning effort for his 2nd shutout of the season.

I get that Anaheim’s had the bulk of the success between the two teams, but the problem I have is that the Ducks just aren’t providing any value as of late and I’m coming to grips with the fact that the Ducks are pretty much done. Vancouver continues to play well, especially at home and I just expect Vancouver to put the hammer down and take care of business here at home. I’ll side with Vancouver and to get the price down, I’ll side with Vancouver on the puck line.