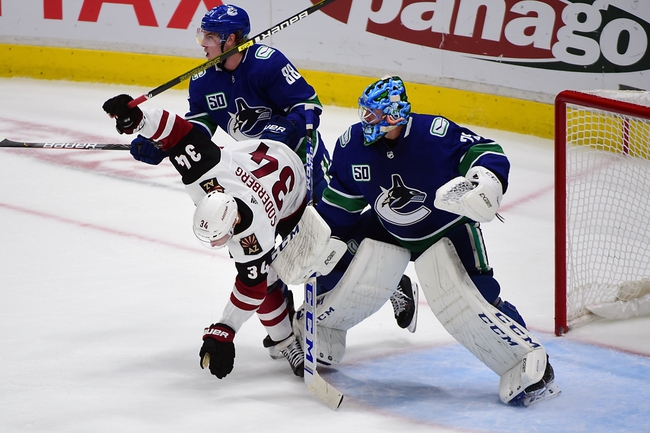 The Arizona Coyotes travel to Vancouver, BC on Thursday for a game against the Canucks in a matchup of teams from the Pacific Division.  In their last game, Arizona defeated the San Jose Sharks by the score of 6-3.  The Coyotes received goals from Lawson Crouse, Conor Garland and 2 goals each from Phil Kessel and Taylor Hall.  Arizona goalie Adin Hill made a the start in net for his team but came away with a loss after allowing 3 goals on 28 shots in the game.

With the win against San Jose, the Coyotes are now 26-18-5 on the season which places them in 1st place in the Pacific Division.  Nick Schmaltz leads the Coyotes in points with 35 and in assists with 28 on the season.  The Arizona leader in goals is Conor Garland who has recorded 16 goals on the season, including 3 on the power play.  Goalie Adin Hill has a record of 2-1-1 with a goals against average of 2.61.  Goalie Antti Raanta is 9-9-2 on the year with 1 shutout and a goals against average of 2.72.  The Coyotes enter Thursday’s game with 4 players listed on their injury report as Antti Raanta is listed as day to day while Niklas Hjalmarsson and Darcy Kuemper are on injured reserve and Brad Richardson is out.

The Vancouver Canucks welcome the Arizona Coyotes to town on Thursday after losing their last game against the Winnipeg Jets by the score of 4-0.  The Canucks were able to put a total of 41 shots on net in the game but were never able to put one past Jets goalie Connor Hellebuyck who stopped every shot that he saw.  Vancouver goalie Jacob Markstrom started in net and recorded the loss as he allowed 3 goals on 24 Winnipeg shots on the night.

On the year the Canucks are now 25-18-4, which puts them in 4th place in the Pacific Division. Vancouver is lead in points and goals by Elias Pettersson who has recorded 48 points and 21 goals on the year, including 6 goals while on the power play.  J.T. Miller leads the Canucks in assists on the year as he has recorded 28 so far this season.  The Canucks have received decent goal play from both of their goalies Thatcher Demko is 8-5-1 with a goals against average of 3.20 on the season while the Canucks’ other goalie Jacob Markstrom is 17-13-3 on the year with 1 shutout and a 2.77 goals against average.  The Canucks enter Thursday’s game with a clean bill of health as they do not have anyone listed on their injury report.