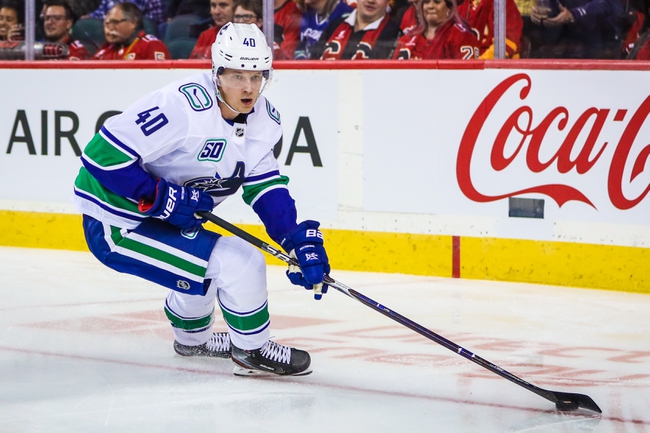 The Los Angeles Kings will play the second half of a back-to-back on Wednesday when they visit the Vancouver Canucks. The Kings play on the road Tuesday against the Calgary Flames before heading to Vancouver. Los Angeles lost its opening game of the season 6-5 to the Edmonton Oilers. Scoring in the loss for LA was Dustin Brown, Anze Kopitar, Trevor Lewis, Drew Doughty and Michael Amadio.

Anze Kopitar is tied with four teammates for the goals scoring lead in LA at one goal apiece. Kopitar is the leader in assists with two and in points with three. Jonathan Quick is 0-1-0 with goals against of 6.19 and .806 saves percentage. Los Angeles is scoring an average of 5.00 goals per game while allowing an average of 6.00 per game.

Vancouver is 0-2 on the season following its 3-0 loss to the Calgary Flames on Saturday. The Canucks could not get on track against Calgary’s fore checking and solid blue line play. In the loss, Jacob Markstrom made 27 saves in net for the Canucks. Vancouver had two power-play opportunities in the third period but could not convert, including 61 seconds with a 5-to-3 advantage.

Alexander Edler and Tanner Pearson lead the Canucks in scoring with one goal apiece. Tyler Myers and three teammates are the leaders in assists with one each and six players have one point each for the Canucks. In net, Jacob Markstrom is 0-2-0 with goals against of 2.57 and saves percentage of .902. Vancouver is scoring an average of 1.00 goals per game while allowing an average of 3.00 per game.

The OVER has cashed in each of the Kings last 6

Take the UNDER in this matchup. The UNDER has cashed in 7 of the Kings last 10 on the road, in 5 of Los Angeles’ last 8 when playing the second half of a back-to-back and in 4 of the Kings last 5 when playing an opponent with a .400 or lower winning percentage. The UNDER has also cashed in 5 of Vancouver’s last 6 at home. Final Score Prediction, Vancouver Canucks win, but our best play is UNDER 3-2