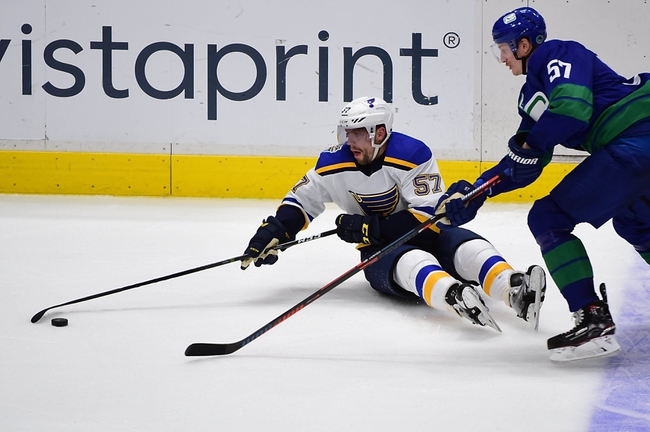 The St. Louis Blues hit the road for a matchup with the Vancouver Canucks, in the first game back from the All-Star break.  The Blues are (30-11-8), after falling to the Colorado Avalanche before the break, 5-3.  The Canucks are (27-18-4), coming off a 4-1 win over the San Jose Sharks.

In the Blues loss to the Avalanche, St. Louis out shot Colorado, 24 to 18.  The Blues had goals from:David Perron, Oskar Sundqvist, and Alex Pietrangelo.  Both teams finished the game with 23 hits.  Jordan Binnington started in net for the Blues, but struggled.  Binnington allowed 4 goals on 11 shots before giving way to Jake Allen.  Allen stopped all 6 shots he faced.

In the Canucks win over the Sharks, Vancouver out shot the Sharks, 39 to 18.  The Canucks also out hit San Jose, 25 to 19.  Vancouver had goals from: Loui Eriksson Tanner Pearson, Quinn Hughes, and J.T. Miller.  Thatcher Demko was inn goal for the Canucks, stopping 17 shots out of 18 possible saves.

Blues are 12-4 SU in their last 16 games against the Western Conference.

The Blues have gone 7-2-1 in the last 10 matchups against the Canucks.  The Canucks have been solid at home, having posted a record of 16-5-3 thus far, while the Blues have been one of the better road teams.  St. Louis is 13-7-4 on the road this season.  The Blues have been solid most of the year on defense, but saw their goals allowed average tick up a few points, after giving up 9 goals in their last 2 games.  The Canucks do have a top 10 scoring offense in the league.  I think the break is exactly what the Blues needed, as I see St. Louis getting back on track. Final score prediction, Blues will win, 3-2.