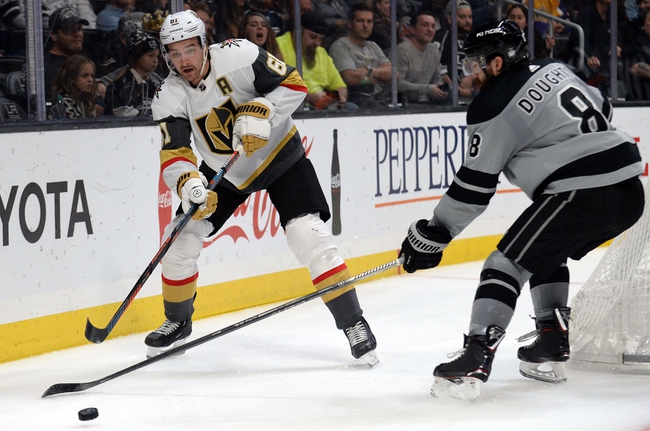 The Los Angeles Kings head to Las Vegas on Thursday for a game against the Golden Knights, but first must play the Dallas Stars on Wednesday.  In their last game, the Kings lost to the Columbus Blue Jackets by the score of 4-2.  The Kings received goals from Alex Iafallo and Trevor Lewis, but it wasn’t enough to come out of the game with a win against the Blue Jackets.  Jonathan Quick took the loss in net for the Kings as he allowed 3 goals on 23 of the Blue Jackets shots on the night.

After the loss against Columbus, Los Angeles is now 17-23-4 on the season and are currently in 8th place in the Pacific Division.  Anze Kopitar has been the leader offensively for the Kings all season as he leads the team in points with 38.  Kopitar also leads Los Angeles in goals with 15, with 4 coming on the power play and in assists with 23.  Goalie Jonathan Quick has a record of 11-16-2 with a goals against average of 3.05.  The Kings other goalie is Jack Campbell who has a record of 6-7-2 with a goals against average of 2.92.  Los Angeles comes into Wednesday’s game with 4 players listed on their injury report as Kurtis MacDermid is suspended, Dustin Brown is day to day, while Joakim Ryan and Trevor Lewis are on injured reserve.

The Vegas Golden Knights welcome the Los Angeles Kings to town after losing their last game by the score of 4-3 against the Pittsburgh Penguins.  The Golden Knights received goals from Max Pacioretty, Paul Stastny and Reilly Smith but it wasn’t enough to pull out the win against the Penguins.  Marc-Andre Fleury started in net for Vegas and took the loss, allowing goals on 4 of the 16 Pittsburgh shots on the night.

After the loss against Pittsburgh, Vegas is now 24-16-6 and are currently in 1st place in the Pacific Division.  Max Pacioretty leads the Golden Knights in points on the year with 44.  Pacioretty also leads Vegas in goals with 19 on the season, with 5 goals coming while on the power play. Mark Stone leads Vegas in assists with 26 on the season.  Vegas goalie Marc-Andre Fleury is currently 18-9-3 with 2 shutouts and a goals against average of 2.84 this season.  Meanwhile, backup goalie Malcolm Subban is 6-6-3 with a goals against average of 2.90. The Knights come into Thursday’s game with 3 players listed on their injury report as Cody Glass, Cody Eakin and Jonathan Marchessault are all listed as out.