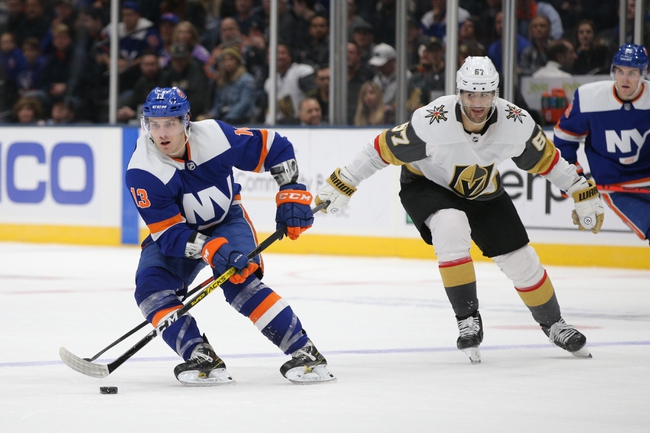 The New York Islanders and the Vegas Golden Knights meet in NHL action from the T-Mobile Arena on Saturday night.

The New York Islanders will be out to rebound after a 5-0 smackdown at the hands of Nashville in their last outing. The Predators opened the scoring just :35 into the game before surging ahead 3-0 after 20 minutes of play. The Preda added a 4th just before the five minute mark of the period and tacked on a 5th goal with just over eight minutes to go in the 2nd period. Neither side got a whole lot going in the 3rd as the Islanders mustered up just four shots on goal, sending the Islanders back empty-handed. Thomas Greiss took the loss, falling to 16-8-2 on the year after allowing 3 goals on 8 shots faced in the loss.

The Vegas Golden Knights will try to build on a 6-5 overtime win over St. Louis in their last outing. St. Louis took the lead just :25 into the game before Max Pacioretty tied the game at one just 1:34 later. Patches would double his tally and give Vegas a 2-1 lead just 4:35 later but the Blues would respond just 3:07 after that, and would take a 3-2 lead late in the 1st. St. Louis pushed ahead 4-2 before Jonathan Marchessault pulled a goal back at 4-3 but Nate Schmidt would tie the game at four for Vegas. St. Louis re-took the lead again bust Alex Tuch had something to say about that, tying the game up at five with less than four minutes to go. The game needed extra time where Marchessault potted his 2nd goal of the game at the midway point of OT to give the Golden Knights the win and the extra point that goes with it. Malcolm Subban got the win to improve to 8-7-3 on the year after stopping 19 of 24 shots faced in the winning effort.

If I must admit, I’m still not completely sold on the Golden Knights as Vegas hasn’t been the strongest home team up to this point, at least like they have been since joining the league a couple of years ago. With that said, I just didn’t like what I saw from the Islanders against Nashville and while I would be surprised if New York picked themselves up and dusted themselves off for a win, I just think the Golden Knights are in a better position to pick up the win here. I’ll take Vegas and to get the price down, give me the Golden Knights in regulation.