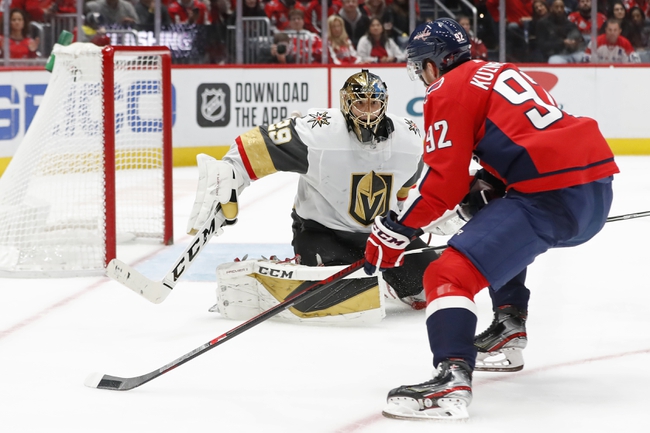 The Washington Capitals and the Vegas Golden Knights meet in NHL action from the T-Mobile Arena on Monday.

The Washington Capitals will look to bounce back after a 3-1 loss to Arizona in their last outing. The game was scoreless through the opening period before Arizona broke the deadlock just over seven minutes into the second period. Carl Hagelin tied the game with just under three minutes to go in the 2nd period. The Coyotes re-took the lead just over five minutes into the 3rd and despite outshooting the Coyotes 14-9 in the 3rd, Washington wouldn’t be able to find an equalizer as the Coyotes iced the win with an empty-netter in the last minute of the game. Braden Holtby took the loss, falling to 21-12-4 on the year after allowing two goals on 29 shots faced in the losing effort.

The Vegas Golden Knights will look to build on back-to-back wins after a 1-0 win over the New York Islanders in their last outing. The game was scoreless through the opening 20 minutes and for most of the 2nd before Reilly Smith gave the Golden Knights the lead in the last minute of the 2nd period as Vegas outshot the Islanders 20-4 in the 2nd period. New York would be outshot 15-9 but even still the Islanders wouldn’t find a game-tying goal as Vegas’ lone marker would hold up as the game-winner. Marc-Andre Fleury got the win to improve to 22-14-5 on the year after stopping all 19 shots faced in the winning effort for his 4th shutout of the season.

I’m trying to find an angle as the why Vegas being favored at home would make sense, but the fact here is that the Golden Knights haven’t been the dominant home team that we’ve become accustomed to seeing since their inception into the league a couple of years ago, and we’re getting plus money with a Capitals team that’s been strong on the road this season, so much so that the Caps lead the NHL in money won on the road this year. There’s just too much value to pass on with the Capitals in this one, so I’ll take my shot with Washington here.