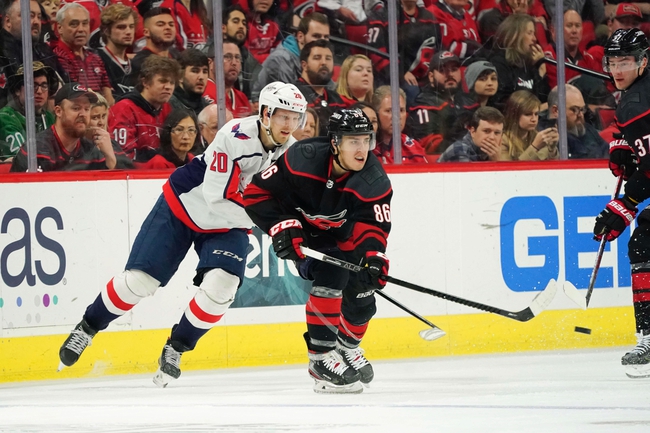 The Carolina Hurricanes head to Washington, D.C. on Monday for a game against the Capitals in a matchup of teams from the Metropolitan Division.  In their last game, the Hurricanes defeated the Los Angeles Kings by the score of 2-0.  Carolina received goals from Nino Niederreiter and Teuvo Teravainen on their way to the win.  Hurricanes goalie James Reimer recorded the win in net as he made saves on all 41 of the Kings shots that he faced.

The Washington Capitals welcome the Carolina Hurricanes to town on Monday after losing their last game to the New Jersey Devils by the score of 5-1.  The Capitals received their lone goal in the game from Jakub Vrana on the power play at 8:28 of the second period with assists from John Carlson and Nicklas Backstrom.  Braden Holtby took the loss in net for the Capitals as he allowed 4 goals on the 21 Devils shots on the night.

With the loss against the Devils, the Capitals are now 30-11-5 on the season, good enough for 1st place in the Metropolitan Division.  Washington is led in points by John Carlson who has recorded 55 points on the season.  Carlson is also Washington’s leader in assists on the year as he has recorded 42 so far this season.  Alex Ovechkin leads the Capitals in goals on the season with 26, with 9 coming while on the power play.  Goalie Braden Holtby is currently 18-9-4 on the season with a goals against average of 3.02. Backup goalie Ilya Samsonov has recorded a record of 12-2-1 on the year in net with a goals against average of 2.24. Washington comes into Monday’s game with 2 players listed on their injury report as Richard Panik and Christian Djoos are both listed as day to day.