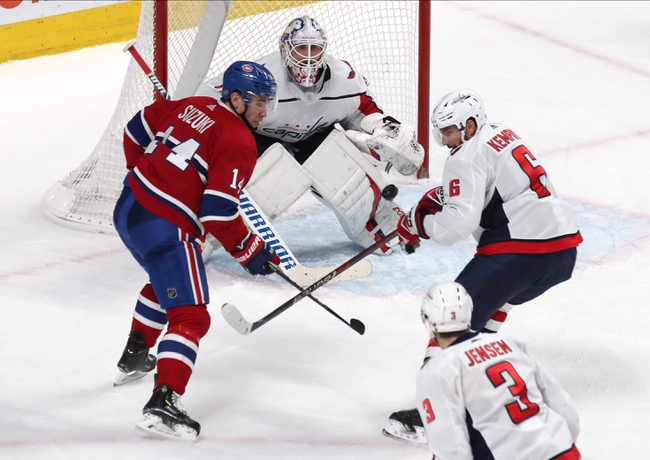 The Montreal Canadiens and the Washington Capitals meet in NHL action from the Capital One Arena on Thursday night.

The Montreal Canadiens will be out to snap a five-game losing streak after a 4-3 loss to Detroit last time out. Nate Thompson gave the Canadiens the lead just under six minutes into the game before Jeff Petry doubled the lead with just under four minutes to go in the opening frame. Detroit got on the board just after the opening minute of the 2nd period but Montreal would restore the two-goal cushion with just over seven minutes to go in the 2nd period. Detroit would pull one back just over five minutes into the 3rd and tie the game at three just after the midway point of the final period. Detroit would push the dagger in with just over five minutes to go, going ahead 4-3 and stifling Montreal the rest of the way, sending the Habs crashing to yet another defeat. Carey Price took the loss, falling to 24-22-5 on the year after giving up 4 goals on 25 shots faced in the losing effort.

The Washington Capitals will look to rebound from back-to-back losses after a 3-2 loss to the Washington Capitals in their last outing. Vegas opened the scoring just under four minutes into the game before doubling the lead with just under three minutes to go in the 1st period. The Golden Knights would push ahead 3-1 with just under six minutes to go in the 2nd, and that lead would hold through a good chunk of the 3rd before T.J. Oshie single-handedly cut the deficit to 3-2 with a pair of goals 1:53 apart. That’s as close as Washington would get though, as Vegas slammed the door shut the rest of the way. Braden Holtby got the loss, falling to 21-13-4 on the year after stopping 26 of 29 shots faced in the losing effort.

I’d like to try to make a case for Montreal as the Canadiens are in dire need of wins while watching their playoff chances diminish by the day. However, the Habs couldn’t beat Detroit again, being swept in the season series losing all four games against the Red Wings, a Red Wings team that has an 11-43-4 record against the rest of the NHL this season. And now I’m supposed to think that Montreal turns it around against Washington, who is still one of the best teams in the league? Not likely. I think Washington steamrolls Montreal and adds to the canadiens’ Misery, so I’ll side with Washington on the puck line here.