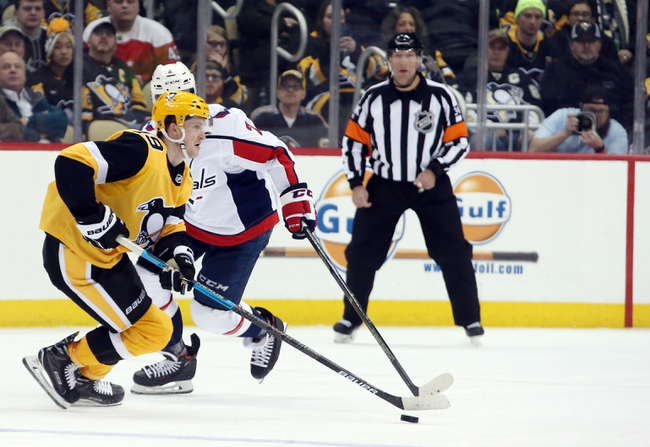 The Pittsburgh Penguins head to Washington, D.C. on Sunday for a game against the Capitals in a matchup of the top two teams in the Metropolitan Division in the Eastern Conference.  In their last game, the Penguins defeated the Philadelphia Flyers by the score of 4-3 in overtime.  Pittsburgh received goals from Evgeni Malkin, Bryan Rust, Kris Letang and the game winning goal in overtime from Sidney Crosby.  Pittsburgh goalie Tristian Jarry recorded the win in net, making saves on 27 of the 30 Flyers shots on the night.

On the year, the Penguins are 32-14-5 and are currently in 2nd place in the Metropolitan Division. Evgeni Malkin leads the Penguins in points and assists on the year with 53 points and 37 assists.  Bryan Rust leads Pittsburgh in goals with 22.  Pittsburgh has received strong goaltending on the season from both Matt Murray and back up, Tristian Jarry.  On the year, Murray is 15-6-4 with 1 shutout and a 2.84 goals against average, while Jarry is 17-8-1 with 3 shutouts and a 2.19 goals against average. The Penguins come into Sunday’s game with 3 players listed on their injury report as Dominik Kahun is out while Chad Ruhwedel is day to day.

The Washington Capitals welcome the Pittsburgh Penguins to town on Sunday after winning their last game against the Ottawa Senators by the score of 5-3.  The Capitals received 2 goals from Alex Ovechkin to go along with goals from T.J. Oshie, Evgeny Kuznetsov and Carl Hagelin on the way to their victory.  Ilya Samsonov recorded the win in net for the Capitals as he made saves on 25 of 28 shots that he faced from the Senators.

With the win against the Senators, the Capitals are now 35-12-5 on the season, good enough for 1st place in the Metropolitan Division.  Washington is led in points by John Carlson who has recorded 62 points on the season.  Carlson is also Washington’s leader in assists on the year as he has recorded 49 so far this season.  Alex Ovechkin leads the Capitals in goals on the season with 37, with 12 coming while on the power play.  Goalie Braden Holtby is currently 19-10-4 on the season with a goals against average of 3.11. Backup goalie Ilya Samsonov has recorded a record of 16-2-1 on the year in net with 1 shutout and a goals against average of 2.12. Washington comes into Sunday’s game with a clean bill of health as they do not have anyone listed on their injury report.