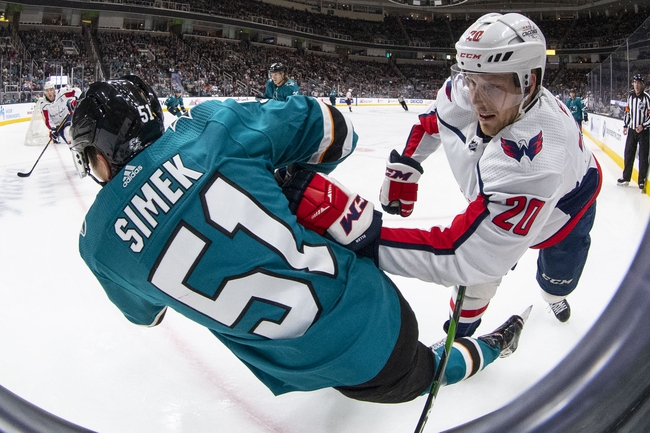 The San Jose Sharks head to Washington, D.C. on Sunday for a game against the Capitals, but first must play the Columbus Blue Jackets on Saturday.  In their last game, the Sharks defeated the Pittsburgh Penguins by the score of 3-2.  The Sharks received goals from Tomas Hertl, Logan Couture and Brent Burns on their way to the win.  Aaron Dell recorded the win in net for the Sharks as he made saves on 36 of 38 Pittsburgh shots on the night.

After the win against Pittsburgh, San Jose is now 18-21-3 on the season and are currently in 6th place in the Pacific Division.  Logan Couture has been the leader offensively for the Sharks all season as he leads the team in points with 34.  Tomas Hertl leads San Jose in goals with 15, with 2 coming on the power play.  San Jose is led in assists by Erik Karlsson who has recorded 24 on the season.  Goalie Martin Jones has a record of 13-15-1 with a goals against average of 3.13.  The Sharks other goalie is Aaron Dell who has a record of 5-6-2 with a goals against average of 3.06.  San Jose comes into Saturday’s game with 1 player listed on their injury report as Melker Karlsson is listed as day to day.

The Washington Capitals head welcome the San Jose Sharks to town on Sunday in what will be the final meetings of the two teams this season. In their last game, the Capitals defeated the Carolina Hurricanes by the score of 4-3.  The Capitals received goals from Richard Panik, Evgeny Kuznetsov, Lars Eller and Jakub Vrana on their way to the win.  Ilya Samsonov recorded the win in net for the Capitals he made saves on 38 of 41 Carolina shots on the night.

With the win against the Hurricanes, the Capitals are now 28-9-5 on the season, good enough for 1st place in the Metropolitan Division.  Washington is led in points by John Carlson who has recorded 51 points on the season.  Carlson is also Washington’s leader in assists on the year as he has recorded 38 so far this season.  Alex Ovechkin leads the Capitals in goals on the season with 24, with 9 coming while on the power play.  Goalie Braden Holtby is currently 17-7-4 on the season with a goals against average of 2.99. Backup goalie Ilya Samsonov has recorded a record of 11-2-1 on the year in net with a goals against average of 2.33. Washington comes into Sunday’s game with 4 players listed on their injury report as T.J. Oshie, Tom Wilson and Nic Dowd are all listed as day to day while Christian Djoos is listed as out.

As of Saturday morning, the San Jose Sharks have scored 2.62 goals per game this year while allowing 3.33 goals per game.  The Washington Capitals have scored 3.50 goals per game this season while allowing 2.93 goals per game.  Both teams are currently 2-3 in their last 5 games.  The Capitals won the first matchup of the season between these two teams, winning by the score of 5-2 in a game played in San Jose.  In the last 3 games between these two teams, the Capitals have gone 2-0-1 and have outscore the Sharks by the average score of 5.33 to 3.33.  Washington is 11-4-4 when playing at home this season while the Sharks are 7-10-2 while on the road.  I am going to go with the Capitals in this one as they have clearly been the better team this season and I don’t see them slowing down against a team like the Sharks.  Washington wins this one 5-2.