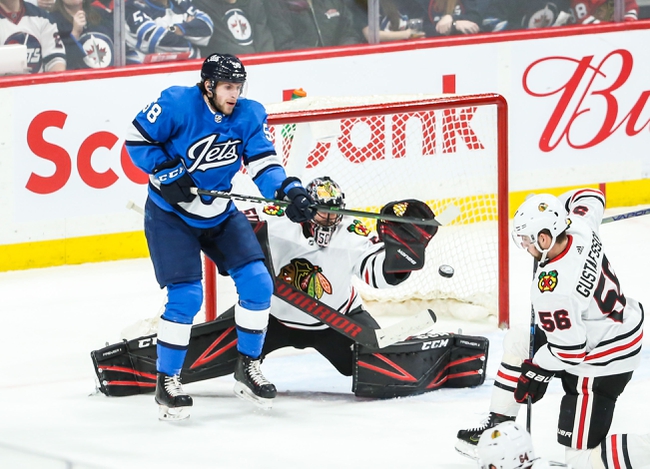 The Chicago Blackhawks and the Winnipeg Jets meet in NHL action from the Bell MTS Place on Sunday night.

The Chicago Blackhawks will look to build on an 8-4 win over Calgary last time out. Jonathan Toews opened the scoring just :30 into the game before Calgary tied the game at one just 1:37 later. Dominik Kubalik restored Chicago’s lead just before the midway point of the 2nd. Brandon Saad added a 3rd to give Chicago an early 2nd period lead before Alex Nylander pushed the lead to 4-2 just 1:04 later. Calgary pulled a goal back just after the midway point but Alex DeBrincat and the aforementioned Nylander would scoring :27 apart to give Chicago a 6-3 lead. Calgary pulled a goal back, but Patrick Kane and Kirby Dach would score 2:11 apart late to push the lead to 8-4, a lead that the Hawks would ride to the finish line. Robin Lehner got the win to improve to 16-9-5 on the year after stopping 38 of 42 shots faced in the winning effort.

The Winnipeg Jets will try to rebound from a 3-2 loss to the San Jose Sharks in their last outing. San Jose took the lead early with just over five minutes to play in the 1st period before Kyle Connor and Blake Wheeler scored 1:26 apart to give Winnipeg a 2-1 lead but the Sharks would tie the game just after the five minute mark of the 3rd and would pot what would turn out to be the game-winning goal just 1:29 after that to pick up the win and send the Jets back empty-handed. Connor Hellebuyck got the loss, falling to 24-18-6 on the year after stopping 32 of 35 shots faced in the losing effort.

I get Winnipeg being favored because they’re rested and at home, but playing on a back-to-back hasn’t bother Chicago as they’ve won 9 of their last 12 on the second half of a back-to-back and the Blackhawks have finally woken out of their slumber and appear ready to get back to work in the playoff hunt. Winnipeg continues to have trouble picking up wins and I’m not siding with a Jets team laying juice when Winnipeg just can’t get out of their own way. I’ll take a shot with Chicago and the plus money here.