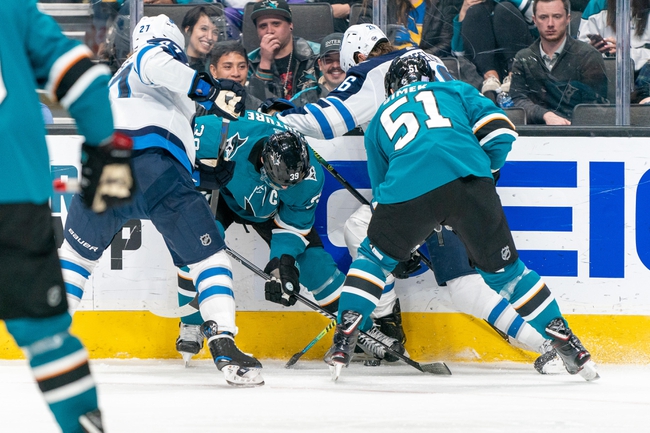 The San Jose Sharks and the Winnipeg Jets meet in NHL action from the Bell MTS Place on Friday night.

The San Jose Sharks will look to bounce back from a disappointing 6-2 loss to the Calgary Flames last time out. Calgary jumped out to an early 2-0 lead with goals :34 apart within the first five minutes before adding a 3rd goals just before the midway point of the opening period. Erik Karlsson got the Sharks on the board just 3:24 later. Brent Burns cut the deficit to 3-2 less than five minutes into the 2nd, but that’s as close as San Jose would get as the Flames restored the two-goal lead just past the midway point of the 2nd. Calgary pushed the lead to 5-2 just over a minute into the 3rd and added a 6th goal for good measure later in the 3rd to take the insurmountable lead. Aaron Dell took the loss, falling to 11-11-2 on the year after alloiwing all 6 goals on 37 shots faced in the losing effort.

The Winnipeg Jets will also be looking to rebound from a 4-1 loss to the New York Rangers in their last outing. The Ranger took the lead with the lone goal of the opening period coming in the final minute of the 1st period before doubling their lead at the seven and a half minute mark of the 2nd frame. New York surged ahead 4-0 with a pair of goals :35 apart in the first 1:28 of the 3rd period before Nikolaj Ehlers got the Jets on the board just 3:07 later. That was as close as the Jets would get as the Rangers would slam the door shut the rest of the way. Connor Hellebuyck ended up with the loss, falling to 24-17-5 on the year after allowing 4 goals on 42 shots faced in the losing effort.

The plus money is tempting with San Jose given how the underdog and the road team have had all of the recent success between the two and the fact that the Sharks have won 5 of the last 6 meetings between the two in Winnipeg. However, I’m done with trying to figure out the Sharks and maybe it’s just time for me to accept that the Sharks aren’t going anywhere come playoff time this year. Winnipeg hasn’t been playing world beating hockey lately, but the Jets are at home and are still in pretty good position for a playoff spot down the stretch. I’ll lay the juice with the team with something to play for here, and to me that’s Winnipeg.