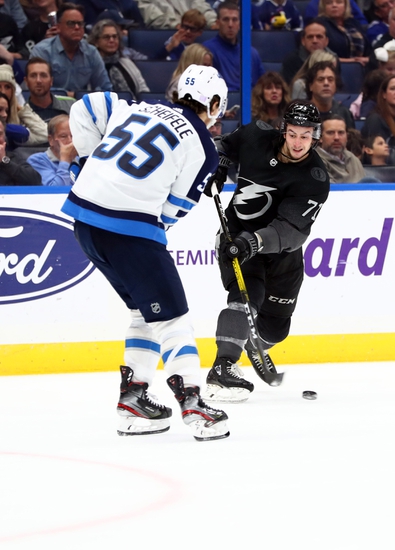 The Tampa Bay Lightning travel to Winnipeg on Friday for a game against the Jets, but first must play the Minnesota Wild on Thursday night.  In their last game, the Lightning defeated the Los Angeles Kings by the score of 4-3 in a shootout.  Tampa Bay received goals from Alex Killorn, Steven Stamkos and Nikita Kucherov on their way to the win.  Andrei Vasilevskiy got the win in net for the Lightning as he made saves on 38 of 41 Kings shots on the night.

After the win against Los Angeles, the Lightning are now 28-14-4, good enough for 2nd in the Atlantic Division.  Nikita Kucherov leads Tampa Bay in points with 50 and in assists with 32.  Alex Killorn is the leading goal scorer for the Lightning as he has scored 19 goals on the year with 7 coming while on the power play.  Lighting goalie Andrei Vasilevskiy is currently 23-9-2 on the season with 2 shutouts and a goals against average of 2.58. Backup goalie Curtis McElhinney is 5-5-2 on the season with a 3.10 goals against average. Tampa Bay comes into the game with 3 players listed on their injury report as Ryan McDonagh, Patrick Maroon and Ondrej Palat are listed as day to day.

The Winnipeg Jets welcome the Tampa Bay Lightning to town on Friday after winning their last game by the score of 4-0 against the Vancouver Canucks.  Winnipeg received 2 goals from Kyle Connor to go along with goals from Jack Roslovic and Blake Wheeler on their way to the win.  Connor Hellebuyck started in net for the Jets and recorded the win, making saves on all 41 Vancouver shots that he faced.

The Winnipeg Jets are now 25-18-4 on the season, good enough for 4th place in the Central Division. The Jets are led in points by Mark Scheifele who has totaled 52 on the season.  Scheifele also leads Winnipeg in assists on the season with 30.  Kyle Connor leads the Jets in goals so far this year as he has tallied 24, including 7 while on the power play.  The Jets have received solid goaltending all season from goalie Connor Hellebuyck who has a record of 21-13-4 to go along with 4 shutouts and a goals against average of 2.57.  Backup goalie Laurent Brossoit is currently 4-5-0 on the season with a goals against average of 3.65. The Jets come into Friday’s game with 3 players listed on their injury report as Bryan Little is on injured reserve, Tucker Poolman is out and Dmitry Kulikov is listed as day to day.

The Tampa Bay Lightning have scored 3.57 goals per game this season while allowing 2.89 goals per game.  The Winnipeg Jets have scored 3.02 goals per game this year while allowing 2.96 goals per game.  In their last 5 games, the Lightning are 4-1 while the Jets are 3-2.  The Jets won the first meeting this season between these two teams by the score of 4-3 in a game played in Tampa.  This should be a highly contested game from two teams in opposite divisions.  Winnipeg is 11-10-2 at home this season while Tampa Bay is 13-7-2 on the road.  The Jets have won 2 of the last 3 meetings against the Lightning.  These team’s matchup evenly, but I will be going with the Jets to continue playing well against the Lightning.  Winnipeg wins 4-3.