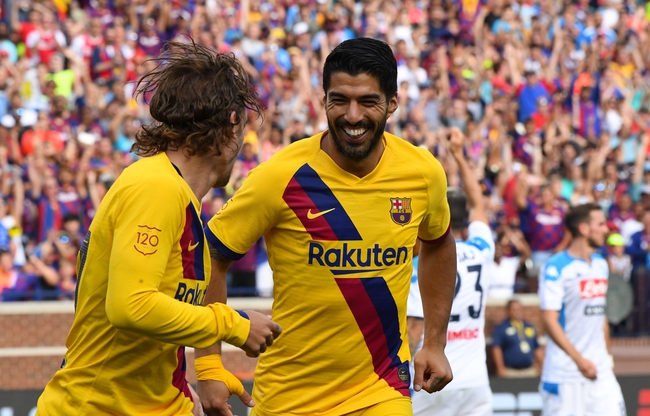 In La Liga, FC Barcelona are set to play at home at the Camp Nou against Sevilla.

FC Barcelona played midweek in the Champions League in a match where they defeated Inter Milan 2-1. It was a decent match for FC Barcelona as they got the desired result but the players lacked chemistry and that is a genuine problem for the team. Antoine Griezmann lacked cohesion with the likes of Leo Messi and Luis Suarez and his substitution was the catalyst for Barcelona to get back into the game. Luis Suarez looked in good form for FC Barcelona as the striker scored both goals for the team. As it currently stands, FC Barcelona are 4th in La Liga meaning the team must start winning consistently if they wish to fight for the title.

On the other side of the pitch, Sevilla have had a decent start to the season and are currently in 6th spot with 13 points. Sevilla played midweek in the Europa League where they won 1-0. It was a good performance by Sevilla as they controlled 78% of the ball and had 15 shots. Javier Hernández scored the winning goal for Sevilla. Sevilla look like a well-balanced team and they have managed to do the basics well which have allowed them to perform well in all competition. This is expected to be a tough match since the Camp Nou is a tough place to visit but Sevilla will feel that they have enough quality to compete.

Sevilla and FC Barcelona are tied on points which means this is a vital match for both teams. I am expecting Sevilla to compete but I don’t see them having enough to get a result from this match. FC Barcelona have too much quality with Luis Suarez and Leo Messi and I see them winning this match for the home team.

The pick in this article is the opinion of the writer, not a Sports Chat Place site consensus.
Previous Pick
Inter Milan vs. Juventus - 10/6/19 Serie A Soccer Pick, Odds, and Prediction
Next Pick
UEFA EURO 2020 Qualifying: Best Bets – 10/11/19 – Odds, Predictions, and Picks