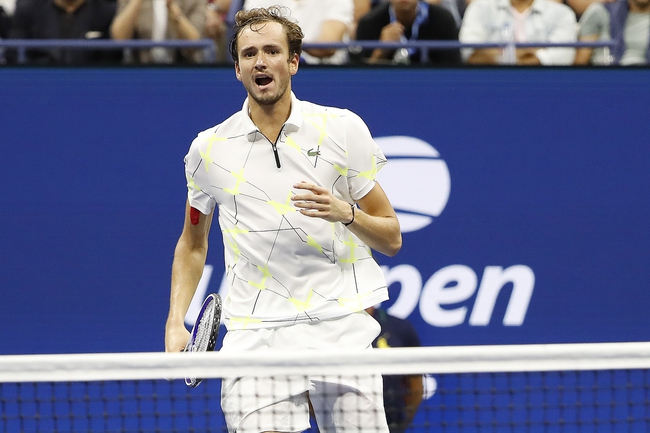 Russian tennis superstar, Daniil Medvedev will be playing at the 2019 ATP Finals in London. Medvedev is set to begin his tournament on Monday as he faces Greek star, Stefanos Tsitsipas.

Daniil Medvedev has been the hottest player since the start of the North American season. Since the conclusion of Wimbledon, Medvedev has won the Cincinnati Masters, St Petersburg Open and Shanghai Masters. Furthermore, Medvedev finished runners-up at the US Open, Rogers Cup and Citi Open. During these tournaments, Medvedev has defeated the likes of Alexander Zverev, Novak Djokovic, Karen Khachanov and Dominic Thiem. It has been an outstanding few months for the Russian and he seems to be playing with a huge amount of confidence. Considering his recent results, Daniil Medvedev will be very hard to stop at this tournament.

On the other side of the coin, Stefanos Tsitisipas has also been in outstanding touch. Tsitsipas had an outstanding Asian season where he made the final of the China Open and the semifinals of the Shanghai Masters. Tsitsipas defeated Novak Djokovic during the Shanghai Masters. The good form has continued for Tsitsipas as he recently made the semifinals of the Swiss Indoors. Despite these results, Tsitsipas will be aware that he must play his best tennis to challenge Daniil Medvedev.

Stefanos Tsitsipas and Daniil Medvedev have played each other 5 times in the past with the Russian superstar winning on all 5 occasions. The most recent match between these two players was last month at the Shanghai Masters where Daniil Medvedev won in straight sets.

Taking everything into consideration, I am going to pick Daniil Medvedev to win this match. Medvedev has been playing on a different level and he has all the momentum having defeated Stefanos Tsitsipas last month in Shanghai. I am expecting a good performance from Tsitsipas but I don’t see the Greek superstar being good enough to stop Medvedev.