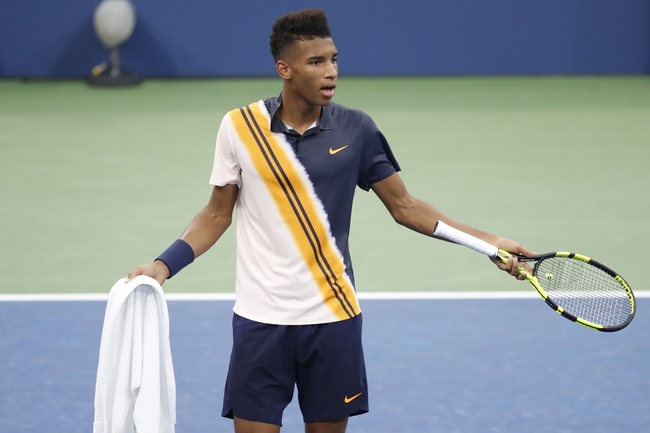 Denis Shapovalov and Felix Auger-Aliassime meet in the first round of the 2019 tennis US Open.

Denis Shapovalov is currently making a run in Winston-Salem at the time this article was published, so he’s going to enter this tournament in good form no matter what happens. Shapovalov has really struggled these last couple of months, so his recent success is a sight for sore eyes and shows the type of player he’s capable of being on hard court. When Shapovalov is hitting his spots and getting his first serve in play, he’s capable of being a scary opponent for anybody. Shapovalov also has a 71 percent winning percentage at the US Open, which is easily his best percentage of any grand slam. Shapovalov has lost in the first round of a grand slam in each of his last two appearances. Shapovalov has won five of his last seven matches on hard court.

These two have played three times and Shapovalov won two of those matches, both on hard court. However, Auger-Aliassime won the most recent match this year in Madrid.

Shapovalov may be playing the better tennis currently and has had success on hard court against his fellow Canadian, you have to be concerned about the amount of tennis he’s playing in Winston-Salem. We see a lot of players get burned out after making a deep run in a tournament right before a major. Auger-Aliassime can do wonders with the rest he’s enjoyed, and he’s still the more trustworthy player at this stage despite his recent hiccups. Shapovalov can be a bit too wild for my taste and really hit himself out of matches.

This is going to be a fun match between two rising stars from Canada, but I give the edge to Auger-Aliassime.