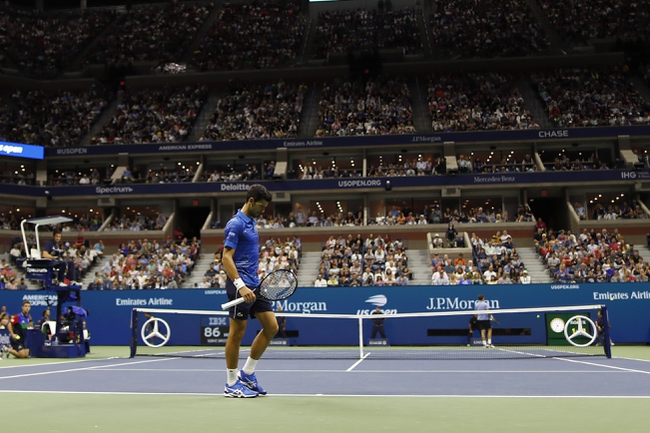 Novak Djokovic has made it into the quarterfinals of the 2019 ATP Shanghai Masters in China. At this stage of the tournament, Djokovic is set to play against Stefanos Tsitsipas from Greece.

Stefanos Tsitsipas has been in excellent form over the past few weeks as he enters this tournament having made the final of the China Open last week. The good form has continued for Tsitsipas in this tournament as he won his previous match against Hubert Hurkacz. It was a close contest that lasted 3 sets but Stefanos Tsitsipas showed his composure to win a final-set tiebreaker. The serving was very strong by Tsitsipas as he hit 7 aces which helped him win 74% of his service points. Tsitsipas won 94% of his service games. The receiving was poor from Stefanos Tsitsipas as he only won 1 return game in the entire match. Tsitsipas must receive serve better if he wishes to compete in this match.

Looking at Novak Djokovic, the Serbian superstar looked very comfortable as he defeated John Isner in straight sets. It was a dominant display by Djokovic as he won all of his service games and 2 return games. Winning 2 return games against Isner shows that Djokovic is playing at his best. Novak Djokovic has been in outstanding touch having won the Japan Open last week. Djokovic is the reigning champions at the Shanghai Masters and considering his current form, the Serbian will be tough to stop.

Novak Djokovic and Stefanos Tsitsipas have played each other twice in the past with both players winning on 1 occasion. The most recent match between these two players was earlier in the season at the Madrid Masters where Novak Djokovic won in straight sets.

Stefanos Tsitsipas is an exceptional player but I see him losing this match. Novak Djokovic is playing his best tennis and in his current state, he is unbeatable. I see Djokovic being too good for Tsitsipas.