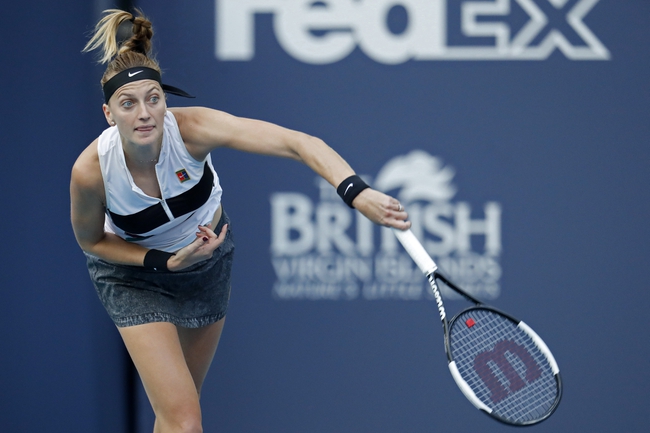 Czech tennis superstar, Petra Kvitova is set to play at the 2019 WTA Cincinnati Masters. Petra Kvitova will begin her tournament in the second round where she will play against Maria Sakkari from Greece.

Petra Kvitova received a bye in the opening round due to her high seeding. This will be the first time that Petra Kvitova is playing since Wimbledon where she was eliminated in the fourth round by Johanna Konta. Kvitova would have been disappointed with her performance at Wimbledon as she was eliminated early at a tournament where she has an outstanding record. It has been a tough few months for Kvitova as he has struggled with injury. Petra Kvitova was supposed to play at the Rogers Cup but she had to withdraw due to an arm injury. Kvitova has a decent record at the Cincinnati Masters as she has made the semifinals of this tournament twice. The most recent semifinal appearance at Cincinnati for Kvitova was last season.

On the other side of the coin, Maria Sakkari defeated Camila Giorgi in straight sets in the previous round. It was a dominant display by Sakkari as she only lost 3 games in the entire match. The receiving was especially impressive from Sakkari as she won 63% of her receiving points which allowed her to break her opponent’s serve on 7 occasions. Sakkari only lost 1 return game in the entire match. Maria Sakkari recently made the semifinals of the Silicon Valley Classic which means that she is in very good form as she enters this match.

Petra Kvitova and Maria Sakkari have played each other twice in the past with both players winning on one occasion. The most recent match between these two players was earlier in the season at the Italian Open where Sakkari won. Kvitova’s win was also in 2019 and it took place at the Miami Masters.

Petra Kvitova is an exceptional player but I see her losing this match. Kvitova has struggled with injury and she seems to be lacking court time. In comparison, Sakkari has played a lot of tennis and she looks in very good form. Sakkari defeated Kvitova earlier in the season and I see a repeat of that result in this match.