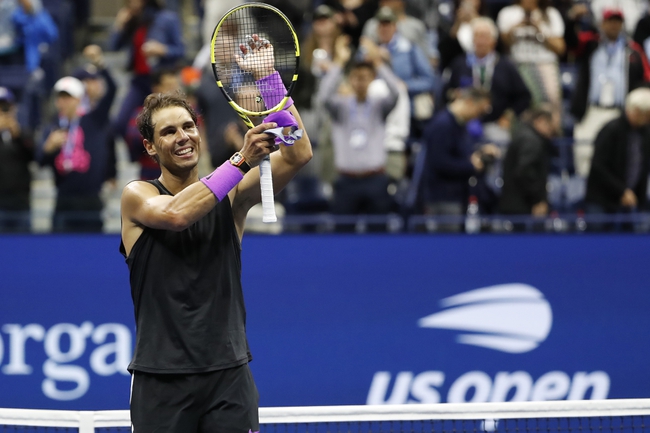 Rafael Nadal and Daniil Medvedev meet in the final of the 2019 tennis US Open.

Rafael Nadal is coming off a straight sets win over Matteo Berrettini that took 30 games to decide. In the victory, Nadal won 90 percent of his first serve points and 74 percent of his second serve points. Nadal won 83 percent of his total service points and converted on four of his 16 break points. Nadal got 55 percent of his first serves in play, didn’t face a single break point and hit four aces. Nadal has now won each of his last eight sets and seems to be getting stronger with his serve as the tournament plays out. Nadal hopes to win his 19th grand slam title and his fourth title overall this year. Nadal has won five of his last seven grand slam final appearances and is 3-1 in final trips at the US Open. Nadal has won 14 of his last 16 final appearances overall and is 20-26 in career final matches on hard court. Nadal has won his last 11 matches on hard court.

These two played once, which was this year in Montreal, a match Nadal won in straight sets. The match was decided in 15 games.

Medvedev has been ridiculously good on hard court this year and has proven that he’s capable of playing with the best in the world. However, Medvedev wasn’t hitting with the power we’re used to seeing in his last match, and you have to question if the amount of sets he’s played the last month or so is taking its toll. Medvedev was sloppy with his first serve and had a lot of unforced errors, things Nadal will capitalize on and create distance in the scoreboard. There’s also the fact Nadal doesn’t lose final appearances much, winning 14 of his last 16 matches with a title on the line.

Hopefully Medvedev makes it competitive, but Nadal should cruise to his fourth US Open crown.