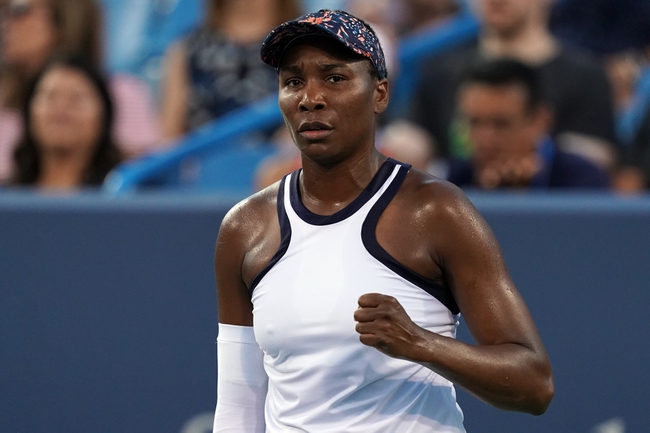 Venus Williams and Saisai Zheng meet in the first round of the 2019 tennis US Open.

Venus Williams is coming off a quarterfinal trip in Cincinnati, easily her best tournament since Miami, so she enters this week with some much needed confidence. Venus has had issues with her serve and unforced errors all tournament and it makes it tough to predict which player you’re going to get from match to match. However, when Venus has her legs under her and is getting her first serve in play, she’s a legit x-factor and capable of crashing a draw. Venus has lost in the first round in four of her last seven grand slam appearances. Venus has never lost in the first round of the US Open. Venus has split her last six matches on hard court.

Saisai Zheng is coming off a second match exit in Cincinnati, but she’s in good spirits overall considering she just won her first career singles title in the Silicon Valley Classic. Zheng beat her fifth career top-10 player in that tournament and has won six of her last eight matches overall. While the service can be shaky at times, Zheng has proven she can be a very tough out when she’s getting her first serve in play. When Zheng gets 65 percent or better of her first serves in play, Zheng has won four of her last five matches. Zheng has lost in the first round in seven of her last nine grand slam appearances. Zheng has won six of her last eight matches on hard court.

These two played once, which was 2015 Zhuhai, a match Venus won in three sets. The match took 24 games to be decided.

Venus matches these days simply come down to her limiting her unforced errors and getting her first serve in play. When Venus is playing clean tennis, she’s still a respectable player out there, but she’s also more than capable of hitting herself out of a match. I still give the edge to Venus because of the home crowd and her rising to a new level at this tournament. Venus has never lost in the first round of the US Open, and she’ll have some extra motivation knowing she doesn’t have many of these chances left.