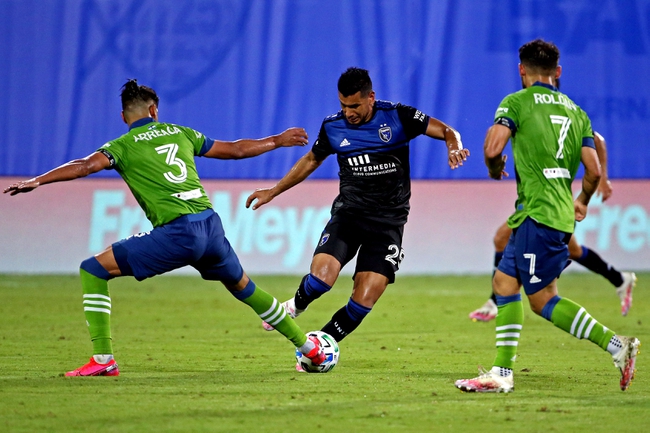 The Vancouver Whitecaps and the San Jose Earthquakes meet in a group stage soccer match as part of the MLS is Back tournament in Orlando, Florida on Wednesday night.

The Vancouver Whitecaps come into this game having yet to play a group stage game after their opener against FC Dallas was cancelled due to Dallas being pulled from the tournament after a positive Coronavirus test. Vancouver did get off to an average start in their first two matches in league play, opening with a 3-1 loss at home to Sporting Kansas City, but bouncing back in a big way on the road with a hard-fought 1-0 win over the Los Angeles Galazy in their last match before the league was halted. Jake Nerwinski and Tosaint Ricketts each have a goal for the Whitecaps while Ali Adria and David Milinkovic each have an assist for Vancouver this season. Maxime Crepeau is Vancouver’s top goalkeeper, conceding one goal per 90 minutes with one clean sheet in two league appearances this season.

San Jose on the other hand, started their MLS is Back tournament experience with a scoreless draw against the Seattle Sounders in their first group stage outing. In the draw with Seattle, San Jose held an edge on the stat sheet with 64% possession and 4 shots on goal in the first half and 60% possession with another 4 shots on target in the second half, but in the end, none of it would turn into anything as neither side would find a breakthrough goal, leaving the points to be split between the two sides at full time. Andres Rios, Oswaldo Alanis, Magnus Eriksson and Valeri Qazaishvili each have a goal for San Jose this season while Cristian Espinoza has San Jose’s only assist. Mario Vega is San Jose’s top goalkeeper, conceding 2.33 goals per 90 minutes with one clean sheet in three league appearances this season.

This should be an intriguing matchup between a Vancouver team that hasn’t had a chance to shake off the rust against a San Jose team that couldn’t get the job done against Seattle but didn’t really give up anything defensively either. With that said, there’s not a whole lot to go on except for head-to-head trends and one does stand out. The last five meetings, 7 of the last 8 and 10 of the last 12 head-to-head between Vancouver and San Jose have seen both teams score and I wouldn’t be surprised if that were the case here as well, so I’ll side with both teams to score as my main bet for this match.

Chris’s Pick Both Teams to Score -160