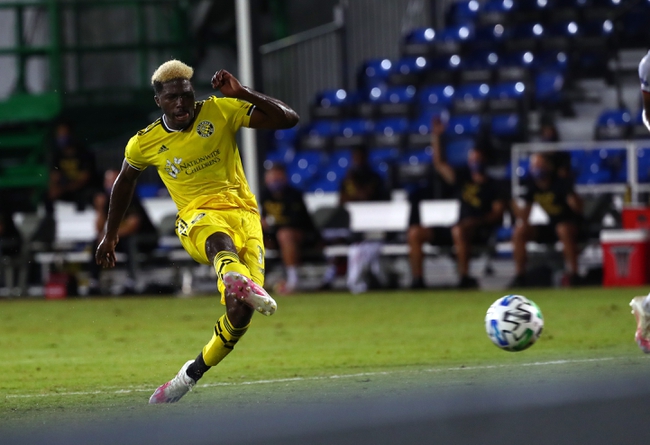 The Columbus Crew and the New York Red Bulls meet in group stage action as part of the MLS is Back tournament from Orlando, Florida on Thursday night.

Columbus Crew come into this one in high spirits after starting their tournament with a 4-0 win over FC Cincinnati in their opening group stage contest. In the win over Cincinnati, Lucas Zelarrayan opened the scoring for the Crew in the 27th minute and Gyasi Zardes pushed Columbus’ lead to 2-0 just three minutes later. Zardes completed his brace and made it 3-0 just four minutes into the second half and Youness Mokhtar added a 4th Crew goal for good measure on the hour mark, leaving Columbus to ride the insurmountable lead to the finish while leaving rival Cincinnati in their wake. Gyasi Zardes leads the Crew with 3 goals this season while Eloy Room is Columbus’ top goalkeeper, conceding just 0.33 goals per 90 minutes with two clean sheets in three league appearances this season.

New York Red Bulls on the other hand, kicked off their tournament with a narrow 1-0 win over Atlanta United in their last match. In the victory over Atlanta, Florian Valot staked the Red Bulls a 1-0 lead just four minutes into the match and despite the amount of firepower that both sides possess in their lineups, that ended up being all that New York would need. The Red Bulls weathered a storm of 69% possession and 14 attempts at goal from Atlanta United, with each side having four shots on goal in the match. Florian Valot joined Cristian Casseres Jr, Kyle Duncan, Daniel Royer and Kaku in the scoring department for the Red Bulls this season with Valot also boasting a team-high two assists. David Jensen is New York Red Bulls’ top goalkeeper, conceding 0.67 goals per 90 minutes with one clean sheet in three league appearances this season.

This should be a great game between two teams that are in some really good form right now, and I think you could make a case for either side, as New York played the tougher opponent in Atlanta in their opener, but having to turn around and play Columbus on a short schedule is no easy task either. Instead, I’m going to side with the draw. I think Columbus may push a bit harder to get a win as you don’t want to have to rely on beating Atlanta United to get a spot in the knockout rounds, but I think New York’s defense does enough to share the spoils here. It’s also worth placing some small side action on the correct score of 1-1 as well for sizeable plus odds.