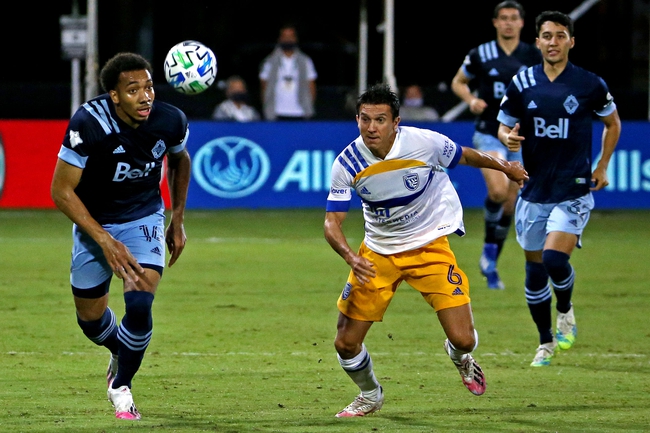 The Seattle Sounders and the Vancouver Whitecaps meet in group stage soccer action as part of the MLS is Back tournament from Orlando, Florida on Sunday night.

The Seattle Sounders come into this game needing a win after falling to 0-1-1 in group stage play with a 2-1 loss to Chicago in their last match. In the loss to Chicago, The game was scoreless through the opening 45 minutes with each side receiving a yellow card, but Chicago would take a 1-0 lead in the 52nd minute. Jandwalla Bhana would pull a goal back to get Seattle level in the 77th minute but Chicago would restore their lead in the 84th minute, leaving Seattle scrambling for an equalizing goal that would never come over the last 10+ minutes of the game.

The Vancouver Whitecaps on the other hand, come into this one on the heels of a 4-3 loss to the San Jose Earthquakes last time out. Ali Adnan gave Vancouver the lead in the 7th minute and Vancouver would take a 2-0 lead thanks to a San Jose own goal 15 minutes later. The Earthquakes would pull a goal back in the second minute of first-half stoppage time, but the Caps would restore the two-goal cushion in the 59th minute. The wheels would start to fall off in the 72nd when San Jose pulled a goal back before tying the game at three nine minutes later. Extended stoppage time was needed, and in the 8th minute of second-half stoppage time, San Jose would pull out a winner to complete the comeback and leave Vancouver stunned after blowing the 3-1 lead.

Normally I’m not trying to lay juice or take a handicap with a winless team like Seattle. However, while Vancouver’s only had one game, it takes more than a couple of days to shake off a huge collapse like the one Vancouver suffered against San Jose. This is also Seattle’s last shot to get points and right now the Sounders wouldn’t even make it in as one of the four best 3rd place teams. I think the Sounders come in and put their best foot forward in this one, so I’ll back Seattle to win with over 1.5 goals to get the wager to even money.