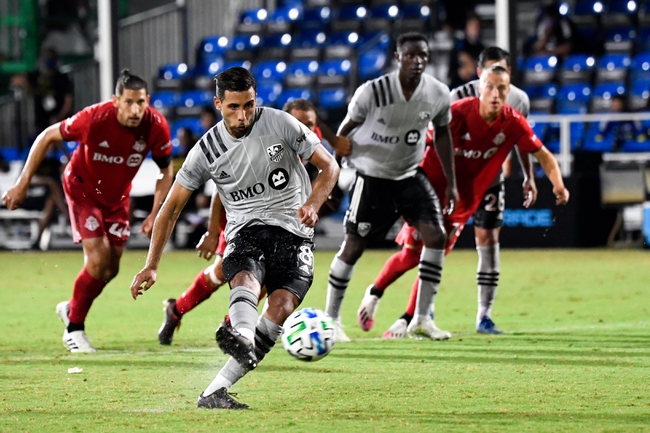 The Montreal Impact and DC United meet in a group stage soccer match as part of the MLS is Back tournament from Orlando, Florida on Tuesday night.

The Montreal Impact come into this match desperately looking for a win after dropping their first two group stage games including a 4-3 loss to Toronto FC last time out. In the loss to Toronto, Montreal fell behind in the 8th minute before tying the game at one in the 14th minute thanks to a goal from Rommel Quioto. Toronto would restore their lead in the 25th but Saphir Taider would have another equalizer for Montreal from the penalty spot in the 37th minute. The Impact would concede again right off of the ensuing kickoff, and would trail 3-2 into the halftime break. Toronto would add an insurance goal in the 83rd minute and Taider did his best to keep Montreal in the match, pulling one back from the penalty spot to complete his brace in the 5th minute of stoppage time, but in the end it wasn’t enough as Toronto held on for the win.

DC United on the other hand, sit in 3rd on a pair of draws following a 1-1 draw with the New England Revolution in their last match. In the tie with New England, the first half wouldn’t see any scoring, only a pair of bookings that ended up coming DC’s way. New England would break the deadlock in the 51st minute but Federico Higuain would respond for DC United in the 72nd minute of play. DC dominated play in the second half with 63% possession, but each side would have three shots on goal and neither would find the go-ahead goal the rest of the way, forcing the two sides to settle for a share of the spoils at the full time whistle.

This is a hard one to call as you have two teams that need points just to have a shot at maybe cracking the four best third place teams, but DC has a chance to leapfrog into the automatic group spots but United just haven’t been good enough to get over the hump. Maybe that’ll change here against Montreal as DC probably won’t have to play from behind, but I expect the Impact to put up a fight here, so I’ll side with the draw as my prediction for this match.