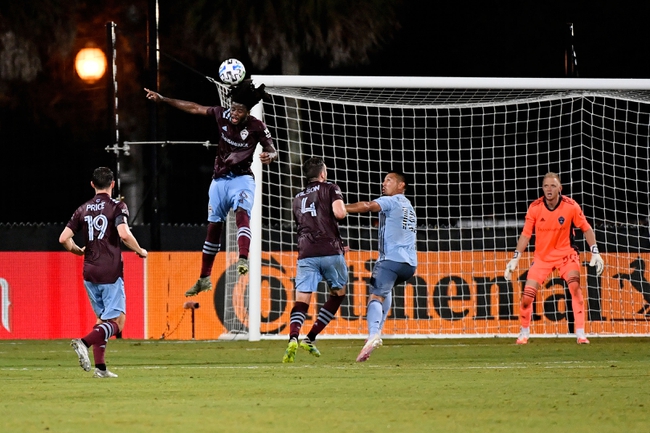 The Colorado Rapids and Minnesota United meet in a group stage match in soccer action as part of the MLS is Back Tournament from Orlando, Florida on Wednesday night.

The Colorado Rapids will look to salvage a win after falling to 0-0-2 in the group stage with a 3-2 loss to Sporting Kansas City last time out. In the loss to Sporting KC, Kellyn Acosta opened the scoring for the Rapids in the 6th minute and the goal held up until well into the second half, but Colorado were dealt a blow when Danny Wilson was shown a straight red card in the 61st minute, leaving Colorado down to ten men. Kansas City would tie the game at one in the 65th and go 2-1 up from the penalty spot in the 72nd before Jack Price was also shown a straight red card, leaving Colorado with nine men. Jonathan Lewis would come on as a substitute and level the game in the 84th minute, leaving Colorado with the possibility of an unthinkable draw with two red cards, but Sporting KC would make sure that didn’t happen, scoring in the first minute of second-half stoppage time to pick up the win and the three points that went along with it.

Minnesota United on the other hand, will try to punch their ticket to the next round after making it to 1-1-0 in the group stage with a scoreless draw against Real Salt Lake in their last match. In the draw with RSL, the first half saw little action with Real Salt Lake owning 55% possession, but with Minnesota owning the lone shot on goal between the two teams. The second half was a bit more open, with each side logging a pair of shots on goal, but in the end, neither side would find the breakthrough goal, and the two teams were left sharing the points with a draw at the full time whistle.

I just don’t think that the tournament can end fast enough for Colorado who had such high hopes for this tournament after a solid start to the year. Minnesota United on the other hand, is showing some promise and I don’t expect them to ease up here with a spot in the knockout rounds on the line.