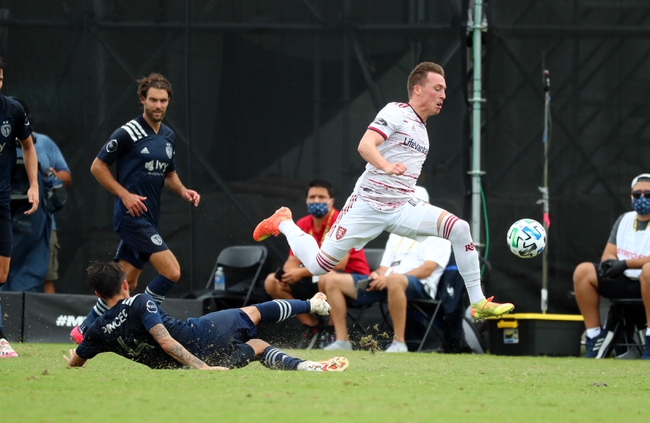 Sporting Kansas City and the Vancouver Whitecaps meet in a round of 16 soccer matchup in soccer action as part of the MLS is Back tournament from Orlando, Florida on Sunday.

Sporting Kansas City booked their spot in the knockout round thanks to a first place finish in group D with a record of 2-0-1 after a 2-0 win over Real Salt Lake in their last group stage contest. Johnny Russell opened the scoring in the very first minute for Sporting KC, and that goal would dictate the pace for the first half as RSL had 57% possession with one shot on goal by halftime. Salt Lake would continue chasing in the second half with 59% possession, but in the second half, RSL couldn’t find the target with any of their goal attempts while SKC locked up the win with a goal from Gerso in the 86th minute of play, leaving Real Salt Lake empty-handed for the first time in the tournament.

The Vancouver Whitecaps on the other hand, reached the knockout stage as one of the four best third place teams, finishing with a record of 1-0-2 after salvaging a 2-0 win over the Chicago Fire in the last group stage matchup. In the win over Chicago, the first half was clean, with no scoring and no bookings. Chicago kept pressure on in the second half, with 64% possession, with each side logging two shots on target, but the difference was that Yordy Reyna would score on one for Vancouver in the 65th and Cristian Dajome would score on the other six minutes later to give the ‘Caps a 2-0 lead they wouldn’t relinquish the rest of the way. Chicago had a goal disallowed in the 85th by VAR to make things worse and to pour salt in Chicago’s wound as they were bounced from the tournament.

Vancouver is playing with some momentum after rallying to come from the ashes and make it to the playoff rounds, and you don’t normally see heavy favorites like these in the knockout rounds of soccer tournaments as the playoff rounds are usually the best of the best. However, Sporting KC’s unbeaten in the last five head-to-head against Vancouver with 4 wins and KC have outscored Vancouver 17-3 over that span, including a win over the Whitecaps to kick off this season. I wouldn’t be surprised to see another Kansas City beating here, so I’ll lay the -1.5 handicap with Sporting Kansas City here.