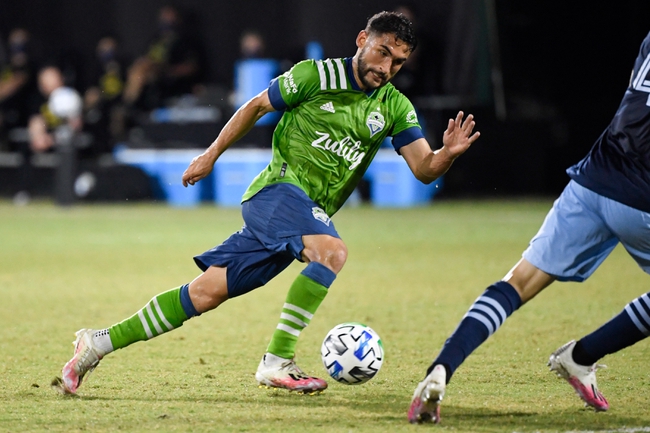 The Seattle Sounders and LAFC square off in a round of 16 soccer match as part of the MLS is Back tournament from Orlando, Florida on Monday night.

The Seattle Sounders booked their spot in the knockout rounds after finishing second in group B with a record of 1-1-1 after a 3-0 win over Vancouver in their last group stage match. In the win over Vancouver, Nicolas Lodeiro gave Seattle the lead in the 16th minute from the penalty spot and Jordan Morris would double the lead in the 34th with Lodeiro assisting on the goal. Raul Ruidiaz pushed Seattle’s lead to 3-0 in the 51st, and despite allowing 66% in the first half, Seattle would counter by taking 61% possession in the second half and holding Vancouver to just one shot on target, keeping the clean sheet in the process.

LAFC on the other hand, booked their spot in the round of 16 after finishing second in group F with a record of 1-2-0 after a 2-2 draw with group winners Portland in their last match. In the tie with Portland, LAFC would fall behind in the 7th minute, but would tie the game and take a 2-1 lead in a span of four minutes as Bradley Wright-Phillips gave LAFC an equalizer in the 36th and Mark-Anthony Kaye would put FC in front in the 40th. LAFC looked headed for a win and the top spot in the group, but the Timbers would equalize at two goals apiece in the 81st minute, forcing the two sides to settle for a sharing of the spoils at full time.

This game features the most basic of rivalries in all of sports. Offense vs. Defense. You have a Seattle team that allowed just two goals in the group stage while keeping two clean sheets against an LAFC team that scored 11 goals in the group stage, but also allowed 7 goals. With that said, I’m having a hard time splitting the two sides but I do expect this to be a back and forth game with it’s fair share of scoring. Each of the last three meetings saw both teams score so I’ll take both teams to score and over 2.5 goals as my bet for this match.