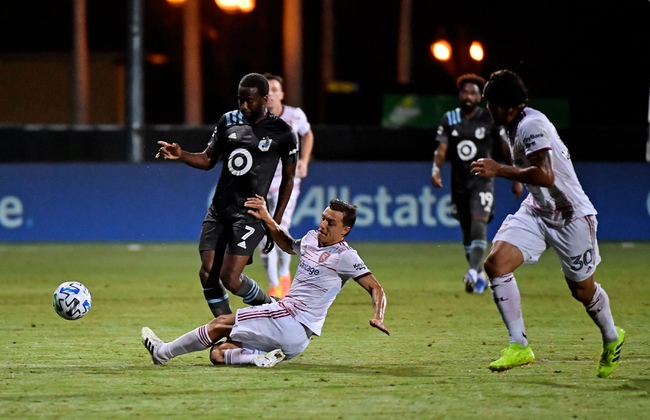 Columbus Crew and Minnesota United meet Tuesday night in the Round of 16 in the MLS is Back Tournament soccer action at the ESPN Wide World of Sports Complex.

Columbus Crew swept Group E and outscored all three opponents by a combined score of 7-0. Columbus Crew is coming off a 1-0 win over Atlanta United where they controlled the ball for 44.7 percent of the match while coming away with six saves and getting an early goal from Youness Mokhtar to close the deal. Columbus Crew hasn’t allowed a goal since March 7 and has pitched shutouts in four of their last five matches. Gyasi Zardes leads Columbus Crew with four goals, Lucas Zelarayan has two assists and Luis Diaz has four shots on goal. Defensively, Eloy Room has allowed one goal on nine shots faced and Andrew Tarbell has allowed zero goals on six shots.

Minnesota United finished 1-0-2 in Group D and is coming off a 2-2 draw against the Colorado Rapids. In that contest, Minnesota United controlled the ball for 55.4 percent of the match while getting eight of its 18 shots on goal. Minnesota United has scored at least two goals in four of its last five matches and has produced a positive result in all of those contests. Kevin Molino leads Minnesota United with three goals, Jan Gregus has four assists and Luis Amarilla has five shots on goal. Defensively, Tyler Miller has allowed six goals on 19 shots faced.

Columbus Crew is 2-1-0 all-time against Minnesota United and has outscored them 4-3 in those contests.

This has a chance to be the best game of the round of 16, as Columbus Crew has been the best team of the tournament up to this point and Minnesota United has emerged as one of the more improved teams in the league the last year or two. Columbus Crew should be favored, but an upset victory from Minnesota shouldn't shock anybody. I'm leaning more toward the under in this spot, as Columbus Crew hasn't allowed a goal this tournament and always plays a passing, ball domination game. Whoever wins, this should be a very low scoring and tight game throughout.