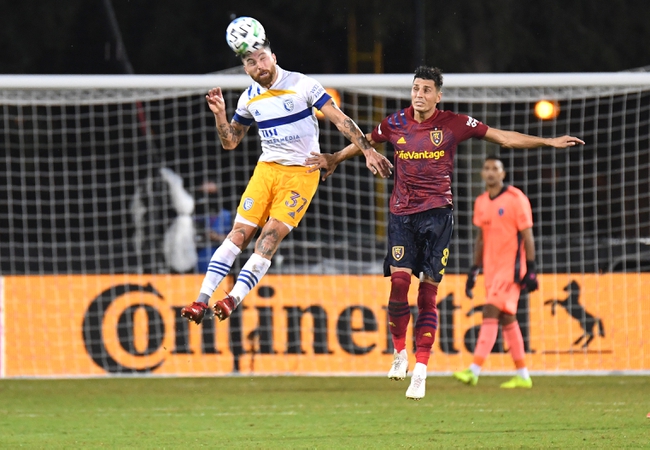 The San Jose Earthquakes and Minnesota United meet in a quarter-final match in soccer action as part of the MLS is Back tournament from Orlando, Florida on Saturday night.

The San Jose Earthquakes punched their ticket to the quarterfinals by way of a 5-2 beatdown of Real Salt Lake in their last match. In the win over Real Salt Lake, Cristian Espinoza gave San Jose the lead in the 21st but RSL would tie the game at one just one minute later. The tie would hold into the second half where Magnus Eriksson would give the Quakes a 2-1 lead from the penalty spot in the 49th minute. Valeri Qazashvili would push the lead to 3-1 in the 61st and RSL would make things interesting at 3-2 in the 75th minute. However, a red card in the 84th put RSL down to ten men and Chris Wondolowski restored the two-goal cushion in the 86th minute. Eriksson would put the game away from the penalty spot in the 6th minute of second-half stoppage time, sending San Jose through to the quarters.

Minnesota United on the other hand, had their hands full in a match with the Columbus Crew where Minnesota United advanced after winning the penalty shootout. In the win over Columbus, Robin Lod gave Minnesota the lead in the 18th minute and it held up until Columbus tied the game at one from the penalty spot in the 79th. The match finished all square at full time, leaving us to go right to the penalty shootout. Tyler Miller would stop Columbus’ third penalty and United would convert on all five of their penalty kicks to win the shootout and advance to the quarter-finals of the tournament.

It’s hard to pick a side here as both teams are capable of pulling off the win and a draw looks appealing as well with how many matches have gone to the shootout so far in the knockout rounds. Instead, I’m going to side with the over here. Each of the last six meetings have seen three or more goals including five of the last six that have seen four or more. I know these knockout round games lend themselves to being tighter, lower scoring games with neither side wanting to make a mistake first, but these two have a history of high scoring matches and I think we see some fireworks here.